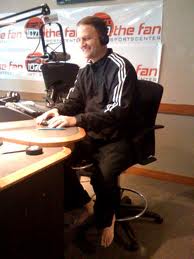 1070 the Fan host Dan Dakich had a spirited discussion with Indiana Pacers play-by-play voice Mark Boyle today, and people on Twitter went a little screwy with talk of the motivation for the argument.

It was a cross media dispute – Dan on the radio and Mark on Twitter, but both sides were heard and prompted by the other.

As someone who knows both guys a little bit, I can tell you there was nothing strategic about the argument.  There was no thought given to ratings as a motivating factor because neither Dan nor Mark care a bit about the audience numbers or Twitter followers.

There is one measure that determines success for talk radio shows or talent, and that is money.  Revenue matters.  The people who respond to a Royal Spa or Today’s Dentistry spot determine the success of the show, not the ratings – which even the company that measures audience concedes are difficult to trust.

Radio management spends some time looking through ratings, but they are not the driving force in decision making on the micro or macro level – or at least it shouldn’t be.  A very smart executive told me repeatedly, “Just do cool stuff.”  If a show is relevant, fun, innovative, and honest, the ratings take care of themselves.

To think that Dan and Mark might conspire to stage a fracas to drive ratings or Twitter follower growth is madness.  Both are repulsed by dishonesty.

There are a lot of people who sit around and concoct fascinating narratives for everything that happens in life, and those are people who tend to enjoy talk radio.  They want any excuse for an answer for their question of the day, and so listening to hours and hours of people ranting is fun for them.

They want to believe that everything in life is manipulated because if it isn’t, randomness and disorder become the drivers of events.  That makes us nervous.

The reason for Dan and Mark achieving the success they have in media is their insistence on telling the truth in an entertaining way.  Disagreement is good for radio, and it’s good for the soul.  It’s dramatic and fun.  Nothing wrong with Dan and Mark getting after it a little bit.

Can’t wait for the next episode.

8 thoughts on “1070 the Fan’s Dan Dakich and Pacers’ Mark Boyle argument not driven by ratings or strategy; just honest disagreement”