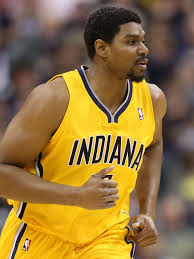 Very little photographic evidence exists to confirm Andrew Bynum’s time with the Indiana Pacers, and nothing additional will be forthcoming.

When on the cusp of a championship run, low risk/high reward moves like the signing of Andrew Bynum are justified.

With functional knees, Bynum is one of the top five centers in the NBA.  Without them, he is a non-factor and bizarre side show.

The Pacers announced today that the experiment has come to an end, and that Bynum will miss the rest of the playoffs and no longer be with the team.

Bynum played a total of two games after signing February 1st – both wins against Boston and Detroit.  He averaged 11.5 points and 9.5 rebounds in almost 18 minutes, but received the most notoriety for reportedly getting a haircut during halftime of a game in which he was inactive.

Not sure whether the proper response for the haircut should be revulsion for a guy that selfish, laughter for an act that ridiculous, or applause for a guy whose time management is so keenly honed.  Regardless, Bynum is now a ghost.

Fans who saw Bynum as part of the reason for Hibbert’s supposed psychological woes will feel validated by the move to dump him, and fans who hoped the guy could contribute once or twice during a series with the Miami Heat are disappointed.

As for Pacers president Larry Bird, he was economical with his words in commenting on the move, “We want to thank Andrew and our medical staff for trying to get the issues with his knee resolved.  We wish him the best in the future.”

When the story for the oddest of all Pacers seasons is written, a chapter will be devoted to Bynum, but it won’t be very long.