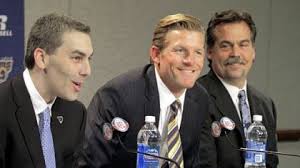 There is no weekend bigger in the development of an NFL team than draft weekend, and if any team is poised to make a leap in quality through its strategic allocation of resources over the next four days, it’s the St. Louis Rams.

In 2012, the Rams made the call to spin the #2 overall pick to the Washington Redskins in exchange the #6 pick and a second rounder in that draft, and $1 picks in the following two drafts.  The final pick in that bounty will be used tonight – either as the #2 overall pick, or as trade bait for a team looking to move up.

There is every likelihood that the Rams will trade this latest #2 pick to produce a slightly less impressive group of picks.  There isn’t a player after Jadeveon Clowney is taken #1 expected to generate the kind of passion that would cause a GM to lose his mind and corrupt this team’s future like RG3 did in 2012, but whatever the Rams get, it will provide more help for a team that is more than one player away from catching any of the other teams in the loaded NFC West.

Since joining the Rams in early 2012, the brain trust of coach Jeff Fisher and general manager Les Snead have never drafted at the position they were assigned.  In 2012, they spun RG3 pick into a #6 pick, which was then dealt for more picks including the #14 pick used on Brockers.  In 2013, the Rams traded up from #16 to #8 where they landed WR Tavon Austin, and traded down from #22 to #30 to grab Ogletree.

One word that describes Fisher and Snead is “bold.”  Like all other teams, the Rams know what they need and who the best targets to fill those needs are.  If the Rams want an offensive tackle, and have Greg Robinson, Jake Matthews, Zack Martin, and Taylor Lewan all graded similarly, why take one at #2 rather than trade down to a spot between #6 and #10 where one or more will certainly be available?

So the Rams will answer the phone, await the deal they want, and pull the trigger.

The big question in St. Louis is whether the Rams will remain steadfastly committed to Sam Bradford as their quarterback.  The former #1 overall pick in 2010 has been a disappointment in many ways for the Rams, and there is no current evidence that he has the makeup to lead the Rams to the playoffs or Super Bowl.  Ranking Bradford among the top 20 quarterbacks in the NFL was a stretch before he suffered a torn ACL against Carolina.

With Bradford’s health a question mark, a $17 million cap hit in 2014, and mediocre results throughout his four years in St. Louis, the timing may be right to be aggressive and roll the dice on a charismatic quarterback like Johnny Manziel with the #13 pick.  Bradford’s dead money is just over $7M for 2014, and $3.595M for 2015.  That would put the Rams roughly $7M ahead for 2014 and $10M for 2015 even if they would cut rather than trade Bradford.

The Rams are young, improving, and suffer from no lack of bold leadership.  Because of what happens today, they will be in a great position to take a leap into playoff contention or continue to fiddle fart near .500 in a division that has represented the NFC in the Super Bowl the last two years.

Whatever happens tonight, I would be stunned if the Rams stand pat and draft second or 13th.