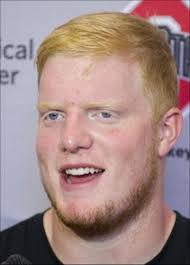 Landing a sexy draft pick that will energize a fan base shows an out of whack sense of priorities.  With their first pick toward the end of the second round, it would have been a waste of time for the Indianapolis Colts to try for sexy.

What they hoped for with the 59th overall pick was a smart, solid, and versatile player.  After talking to Ohio State offensive line coach Ed Warinner about offensive lineman Jack Mewhort, it seems they got exactly what they were looking for.

Mewhort is not explosively fast, but offensive linemen are supposed to create contact, not separation.  He’s projected everywhere on the line by different coaches and scouts.  An All-American left tackle at Ohio State, Mewhort was also an all-state center in high school.

The Colts have areas of need throughout the interior of the line, and Mewhort appears to be a solid candidate for any of them.  Khalid Holmes, Donald Thomas, Joe Reitz, Thomas Austin, and Hugh Thornton are all interior line candidate, but they didn’t draft Mewhort to sit.

Interior linemen drafted in the first two rounds are supposed to play, and at 6’6″, 309 lbs., he is certainly big enough to get in the way of most defensive tackles.  At Ohio State, Mewhort learned toughness and how to win.

Warinner knows him better than most, and shared his thoughts on Saturday’s “Ahead of the Curve.”