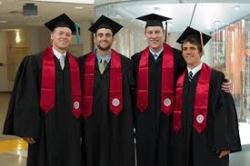 Austin Etherington, Will Sheehey, Jeff Howard, and Taylor Wayer received their degrees, and helped maintain the basketball program’s academic perfection as measured by the NCAA.

When I was a student, as long as I did my work, report cards were a lot of fun.  If I made choices that kept me away from work, I sweated out mail delivery everyday until the bad news came.

Today is a lot like that for athletic directors across the country as Academic Progress Rates for all programs at all schools are released.  For schools like Indiana with perfect 1,000s across 15 programs for the 102-2013 academic year, today is a good day.  For the Alabama States and Florida A&Ms of the world, with postseason bans in men’s basketball and football, today is no fun.

Once, in Journalism Law, I wrote a paper I was proud of, but when it was handed back I opened it to see a big red F on the front.  My topic was not quite close enough to the broad subject assigned.  I spoke to the professor later, and received a B after convincing him that the work was mine.

I felt miserable seeing the F.  Southern University likely feels like that today after all teams were ruled ineligible for the postseason “due to unusable data.”  Guessing that means the forms were completed incorrectly.  Yikes!  If the academic folks in the athletic department are unable to submit usable data, how good could the education at Southern be?

Here are the Big Ten rankings in football and men’s basketball (930 is the threshold for postseason eligibility, and 1,000 is a perfect score):

These scores are four-year averages.  The easiest math is for Indiana hoops – this is the fourth straight year that Indiana basketball has put up a perfect score in basketball.  Fifteen of the 24 programs at IU posted perfect scores for the 2012-2013 academic year, and four enjoy 1,000 scores over the last four.

The benchmark for postseason eligibility jumped from a four-year average of 900 to 930, or an average of 940 over the last two years.  For the 2014-2015 season, 36 teams face postseason bans.  In football, Alabama State, Florida A&M, Mississippi Valley State, Prairie View A&M, St. Francis of Pennsylvania, Savannah State, Arkansas-Pine Bluff, Idaho, and UNLV are ineligible.

The APR is calculated in this way – each student-athlete earns one point for getting good grades and one point for staying in school or graduating each semester. The total points earned are then divided by the total possible points and multiplied by 1,000 to get the final APR for that semester.

This is not a perfect barometer for academic achievement as the system can be gamed, but schools only hurt their own athletes by engaging in that practice.  What the APR system should be is a goal for schools and a measuring stick for recruits who want to make sure a school is committed to fulfilling their part of the bargain in providing an education in exchange for the work required as an athlete.