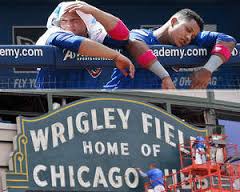 This image from the Chicago Sun-Times says it all.

Wrigley Field is baseball’s inflatable sex toy.  Squint and it looks good enough, but there is nothing inside to compel interest.

When the Oakland A’s grew mustaches in the early 1970s, it was cool because they were the best team in baseball.  When the Boston Red Sox grew beards last season, it worked because they won.  Seats on the Green Monster changed tradition, but the Red Sox were preparing to win a championship, so fans embraced it.

The Cubs are altering the look of Wrigley Field and players are growing odd shaped hair on their heads and faces, and are thought to be idiots because they are losing in historic numbers.  It appears to those on the outside that more thought is being given to celebrating the 100th anniversary of Wrigley Field than building a respectable team, and that players are better at adjusting their coiffure than playing baseball.

Latest in the string of indignities is painting the iconic marquee that overlooks the intersection of Clark and Addison.  The new color is fern green, which is the same as when the sign was installed in 1934.  Obviously, this isn’t the first time it has been painted or structurally changed.

Electronic signage was inserted into the middle over a decade ago, and the sign was briefly painted purple in 2010 for the ill-conceived and poorly executed Northwestern vs. Illinois football game – one of the first boondoggles that signaled the impending idiocy of the Ricketts Regime.

The sign actually wasn’t painted red until the 1960s, and fans would have much less an issue with any of the clever tips of the cap to the history of the ballpark if the onfield product had been assembled with the same creative passion.

Whatever the cause for the pitiful execution of the field, the Cubs are a terrible baseball team very likely to finish with 90+ losses for the fourth straight season, which would guarantee the worst four-year run in the history of the franchise that has long been renown as the lovable losers of American sports.

There are signs of improvement – through 38 games Anthony Rizzo has more walks than strikeouts (27 and 26) and an on base percentage of .396.  Starlin Castro is back on the track that made him a slightly above average shortstop in 2012, rather than a poor one in 2013.

The front office continues to point to the minor league system as a source of hope, and while Kris Bryant is tearing the Southern League apart with 11 home runs, 33 RBI, and an OPS of 1.045, others like Javier Baez (11 hits and 43 strikeouts in 102 ABs) and Albert Almora (.258 BA and .670 OPS at high-A Daytona) are languishing.  Jorge Soler has seven doubles in 22 ABs in Tennessee as a teammate of Bryant’s, but to say help is on the way is assuming facts not yet in evidence.

Maybe team president Theo Epstein is a really smart guy, and fans won’t give a damn one way or another what color the marquee is in 2020 when all of that young talent is on display inside Wrigley Field instead of scattered around the minor league system.

Today, all fans know is what they see, and even with the +3 markup on a 1-10 scale for those who are deep into a day or night of Old Style, the Cubs are a four at best.  The Cubs are literally the slump-busters of baseball.

Nate Schierholtz, Darwin Barney, and Mike Olt are all starters hitting .200 or below, and management continues to try to shoehorn Luis Valbuena into the lineup despite no obvious reason.  Tickets are sold at a premium, and there will surely be another sell off of valuable parts in July, including winless ace Jeff Samardzija.

If Samardzija was paying for tickets rather than cashing $5.34 million for his work this season, he would be the most pitiable man in Chicago.  Through eight starts, Samardzija has an ERA of 1.45 and a WHIP of 1.054 but zero wins.  In five of those starts, Samardzija has allowed a combined two earned runs in 36 innings.  Only for the Cubs could a pitcher languish like that.  He has every reason to be miserable, but not more that the fans who suffer through every loss, and are lighter in the wallet for it.

So the Cubs slap some green paint on the marquee.  Brian Schlitter grows his hair and beard like George Harrison in the late 1960s.  Samardzija continues to rock the Joey Ramone look.  And the Cubs continue to lose.

Maybe style over substance is good enough for fans of a team where winning is of no immediate importance to ownership.