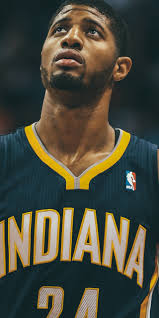 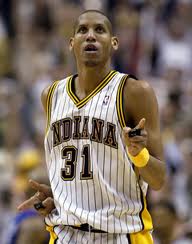 Both Pacers teams finished the regular season 56-26, one team still with several young parts, and the other on its last legs before being disbanded.

2000 was the year a team that had been together for several years finally got over the hump to earn the only trip in the NBA Finals in franchise history, and 2014 started like the season the Pacers might return (and still might).

It’s hard to accurately compare two teams by breaking them down to their essential parts, but that’s all we really have to go by.  The chemistry that leads some teams to win is impossible to measure, so let’s match them up position by position and see who comes out on top.

This is tough because Jackson was a real point guard, and Hill doesn’t even like to be referred to as a point guard.  George Hill is a slightly more productive scorer and gives the Pacers more minutes, but Jackson was an outstanding facilitator who averaged eight assists per game.  Hill finished third on the Pacers in assists per 36 minutes with 3.9.  On the other side of the ball, Jackson was not a great defender at any point during his career, but at 34 had slowed.  Hill is a solid if unspectacular defender.

Miller is a member of the Basketball Hall of Fame.  Lance Stephenson is still finding his way to be a consistent and mature presence on the floor.  When Miller was 23, this would have been a much closer comparison, but that isn’t the job here.  From a statistical perspective, the comparison is closer than you might guess.  Miller’s per 36 minutes averages in the regular season – 17.7 pts, 2.9 rebs, 2.3 ass., and 1.6 TOs.  Stephenson’s were 14.1 pts., 7.3 rebs., 4.7 ass., and 2.7 TOs.  Not factored into the equation is Reggie’s propensity to hit the big shot(s), leadership, and other intangibles, but he wins the battle regardless.

I was surprised that Rose led the Pacers in scoring, and even more surprised I didn’t remember that.  Rose was a very solid piece of the Pacers puzzle for a five-plus years, and George is headed for the rarified air of being a guy whose number someday hangs from the rafters in Bankers Life Fieldhouse.  Rose never made an all-star team, while George has earned a spot on the last two.  Per 36 minutes, Rose averaged 17.6 pts., 4.7 rebs., 3.9 ass., and 1.0 steals.  George averaged 21.6 pts., 6.7 rebs.,  3.5 ass., and 1.9 steals Rose was a good defender, but George is elite – finishing third the last two seasons in defensive rating.

These are two very different guys playing the same position.  Davis didn’t need to score for the 2000 Pacers to win, but West is a key component of a team offensive concept who averaged 16.3 pts., 7.9 rebs., and 3.2 ass per 36 minutes.  Davis averaged 12.6 pts., 12.3 rebs., and 1.1 ass.  What elevates West to the win is his leadership.  I don’t know what kind of hijinks the young guys might have been responsible for without their big brother watching, and I’m glad I don’t.  West is a steadying influence on this team in a way that Davis did not need to be.  In his role, Davis was very effective, but West’s role on and off the court is bigger.

This was the Dutchman’s last campaign, and Hibbert is in the middle of his prime.  Recent bi-polar production notwithstanding, Hibbert was surprisingly close to Smits in scoring.  Pacers fans remember Smits knocking down shot after shot from 16-20 feet, and are currently quite frustrated with Hibbert after a miserable Game Five, but that doesn’t change the regular season numbers.  First, Hibbert averaged 6.3 more minutes per game than Smits.  Contributing is tough from the bench.  Smits’ raw per game averages – 12.9 pts., 5.1 rebs., and 1.3 blocks.  Hibbert – 10.8 pts., 6.6 rebs., and 2.2 blocks.   Smits had 28 double digit game scores (which basketball-reference.com uses to calculate the positive impact a player has on the game) during the regular season while Hibbert had 30 (22 in the first half of the season; eight in the second).  Hibbert is an elite defender when he plays well.

Advantage: Hibbert – because this isn’t about who I would rather have tonight, but who had the most impact on the Pacers for the entire season.

Bench – The 2000 group had old pros who were excellent role players like Chris Mullin and Sam Perkins, and a couple of younger guys like Travis Best and Austin Croshere.  The 2014 team uses veterans like Ian Mahinmi, Luis Scola, C.J. Watson, and Evan Turner.  Scola has been a great get for the Pacers, averaging 16.1 pts and 10.1 rebs per 36 minutes, but it’s hard to compete with a group that includes great players like Mullin and Perkins.

Coaching – Larry Bird vs. Frank Vogel is a tough call.  It’s hard to judge which coach is best based upon watching games and the end of practices.  They are entirely different guys.  Bird had a veteran group of pros.  Vogel has worked to develop a significant number of young players.  For the current Pacers, Vogel is the better coach.  For the 2000 team, Bird was perfect.