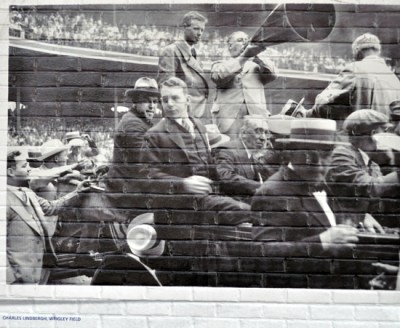 Not only are the arches a giveaway that this picture is of Comisky Park, so is the facade, and the fact that the upper deck at Wrigley in the area photographed had not been completed in 1927.

What the hell kind of operation is being run at 1060 West Addison by Cubs owner Tom Ricketts?  The onfield product is a total mess, and likely to get worse with the annual July garage sale of valuable parts, but a visit to Wrigley Field for the 100th anniversary celebration of the venerable ballpark just trumped the inability to score runs as a source of humiliation.

There is a picture on the outside of the left field wall that Cubs officials believed captured Charles Lindbergh visiting Wrigley Field in 1927 not long after his solo flight across the Atlantic Ocean to France.  Unfortunately, the picture is quite obviously of Comiskey Park.

While the original Comiskey was razed over 20 years ago, the arches are still very memorable landmarks of the original Baseball Palace, and they are quite visible on the mural.

Waiting in line to buy tickets not long ago, Floyd Sullivan studied the mural.  Sullivan had just edited a collection of essays and photographs – Old Comiskey Park: Essays and Memories of the Historic Home of the Chicago White Sox, 1910-1991.  Sullivan himself had contributed an essay about the Lucky Lindy’s visit.

Sullivan then wrote a piece for chicagonow.com detailing his discovery, which I can only imagine is correctly causing great embarrassment in the Cubs front office.

Every organization is rightly judged by how they handle the details, and the Cubs fail on every level.  Week after week, the team struggles, and the franchise fails to execute even the simplest tasks.

Chunks of concrete fall, the iconic and often marketed as a logo red marquee is painted green, and the outfield is used as a walk-in movie theater.  Worst of all, an agreement created by Crane Kenney, who inexplicably remains as the president of business operations, has created a dispute with the rooftop owners that continues to hamstring efforts to monetize the property.

The Cubs inane stewardship by Ricketts would be funny if not for the millions of fans who continue to hope that the gang who can’t shoot straight gets contact lenses.  Hell, this gang doesn’t just have trouble shooting straight, it can’t keep from pointing their guns at themselves.

The comparative genius of the White Sox makes me wonder whether Sox owner Jerry Reinsdorf didn’t know exactly what he was doing when he torpedoed Mark Cuban’s bid in favor of Ricketts.