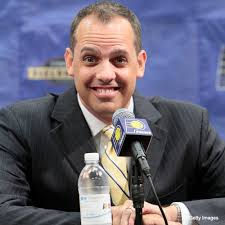 What I like best about Frank Vogel as Pacers coach is that he seems to enjoy everything about it.

It feels like yesterday that Frank Vogel was tabbed as the interim replacement for Jim O’Brien in January of 2011.

When I moved back to Indianapolis last summer after a brief sabbatical in St. Louis, the first person I interviewed was Vogel.  I was still fascinated by his route to becoming an NBA head coach and asked him some insipid question about waking up in the morning and pinching himself.

Vogel squinted briefly and gave me a patient and polite answer.  I started to think about how long he’s been the head coach of the Pacers, and I looked up the record for games coached.  Surprisingly, Vogel was not too far behind the very best the franchise has ever had.

During the NBA era of the team beginning in 1976-1977, their have been 13 head coaches of the Pacers, and oddly Larry Brown, Rick Carlisle, Bob ‘Slick’ Leonard, and Jack McKinney are all tied with exactly 328 games coached.  For non math majors, 328 games equates to four full seasons.

Vogel nests at 267 games because of the of the 38 games he coached in 2011 after taking over for O’Brien, and the 66 during the following season shortened by a lockout.

That leaves him 61 behind the leaders, and unless he is hit by a beer truck between now and mid-March, 2015, Vogel will become the all-time franchise leader (obviously, when ABA games are factored in, Slick is the leader, and will likely remain the leader forever with 985).

The all-time franchise leader in NBA wins is Larry Brown with 190.  Vogel is in third – only 23 behind with a record of 167-100.  Even if the Pacers get off to a slow start, Vogel will own that record by next year’s all-star break.

Vogel is only four behind Larry Bird for NBA playoff games coached, so a win in one of the first four against the Heat will wrap that one up.  Bird leads Vogel by six in all-time NBA playoff wins with 32.  If the Pacers can get past the Heat, he has a great chance of owning that record too one month from now.

While Vogel is obviously a good coach and effective leader, that he will become the leader in every meaningful coaching categories at the age of 41 is beyond belief.

If Vogel has stopped pinching himself because he is an NBA head coach, his longevity should be reason to start again.