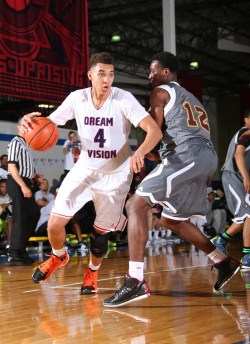 Chase Jeter of Las Vegas drives to the basket. He’s a very skilled player who is going to play college basketball at the highest level.

There are some very tall and talented athletes playing basketball at the Fishers Fieldhouse today.  Some of the guys that you be watching for the next decade – cheered by millions – are playing in front of friends and family just down the street.

Not that fans of great basketball should head over there to watch.  The schedule is daunting, so the defense is wanting.  Five games in three days doesn’t allow for the kind of hustle and tenacity that fans see in high school gyms or college arenas.

That doesn’t mean it isn’t worth the $5 at the door to watch.  The bizarre behavior of the parents is well worth that.

Anyone with a son who played summer basketball at a high level has been there.  The ill-temper after a silly turnover, and the glee when a three-pointer cuts through the nets make watching youth basketball a petri dish that grows the worst parental behavior imaginable.

If you have never seen it, consider yourself fortunate.  Even the best parents squirm in their seats and mutter to themselves.  The bad ones have no trouble screaming like one dad this morning, “Foul!  What do you want him to do .  He’s just standing there.  Bobby, you just keep doing what you do.  This ref don’t know what he’s watching.  He ain’t never seen nothing like you!  And get a rebound Bobby, would you?  Jesus, you’re too tall and strong to not get every damn rebound!”  He didn’t stop there, but I will.  The harangue went on throughout the game.  Every step the kid took was critique, and the kid glared at him throughout.

After the game, the dad tried to continue the ill-tempered instruction, but the kid walked by without making eye contact and walked into the men’s room where he stayed for more than 10 minutes.

Parents ragging the referees, busting on the coaches, and silently cursing the basketball gods for daring to not allow every shot to fall is all too common, but it’s never going to stop.  It would be great though if they would let the kids play without endless criticism.

If everyone had the perspective to simply watch, enjoy, and support their sons and the friends he makes as a result of playing, the summer basketball experience would be so positive, but for some inexplicable reason that just can’t happen.  Maybe there are parents who can muster the discipline to do it, but I’ve never met them.

Some of the histrionics of parents living vicariously through their sons are hilarious, but inevitably some go too far – pushing a kid to where he either lashes out or hides.  What should be fun is made miserable, and that’s the greatest shame of youth sports.

It would be wonderful is parents could be banned from events, but that’s impossible because they are the entire reason the events exist in the first place.  The money parents throw at travel, attendance, and the entire financial structure of youth sports greases the skids.

Somehow the kids come through the chaos mostly unscathed and better for the experience.  Maybe they’ll become a saner group of dads, but I wouldn’t bet on it.  The gravity toward psychosis is far too strong to ignore.

There are potentially great players toiling at the Fieldhouse, and discovering their ability is almost as much fun as listening to parents bitch and moan is miserable.  To watch the very polished post play of Bishop Gorman HS (Las Vegas) forward Chase Jeter versus the incredible height and length of top ranked 2016 Thon Maker of the Carlisle School in Virginia was great fun this morning.

But so was watching the Jordan Hulls-esque play of Maker’s teammate Caleb Tanner.  He’s not listed in any rankings, but he’s very solid with almost limitless range.  That’s the fun of these events – finding an under the radar kid with something immeasurable that might make him successful on some level in basketball, but will definitely hold him in good stead as an adult.

Maybe they will remember the preposterous act put on by parents way too immersed in the immediate gratification of watching their sons succeed momentarily, and try to see the forest of the positive effect basketball can have on a kid’s life for the trees of each missed shot or blown call.

As we wait to watch some men play this afternoon for a chance to get to the NBA Finals today. we see kids three or four years away from living that dream play because they enjoy it in spite of their nutty as hell parents.