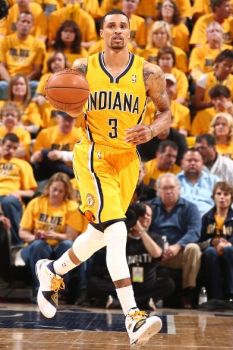 George Hill’s hot start was key to the Pacers asserting their will in Game One.

The Game One performance of the Miami Heat is not going to be repeated.  Lethargic, slow, indifferent, imprecise – the Heat were all of that and less.  Champions don’t back up a miserable effort with another one very often.

As much as fans would like to believe that this relatively easy win had more to do with the Pacers effort than the Heat slogging through this game like it wasn’t worth their time, it would assume facts not in evidence.

That would be a wackily optimistic view that the Pacers certainly are wise enough not to share.  The Heat will be back – and they will be angry.

Paul George and company shot 37 free throws to the Heat’s 15 and out rebounded the Heat by 10.  Virtually everything that could go the Pacers way did just that.  The reason?  The Pacers were more aggressive through the game on both ends of the floor.

Indiana never trailed, led by 10 at the half, and never led by fewer than eight from that point forward.  That kind of consistency has not been the calling card for this team over the past four months, but it sure returned at a very good time.

The 107-point scoring explosion is the most points scored by the Pacers in regulation since a 118-98 win over the Los Angeles Lakers on February 25.

When they check the game film, the Heat will see instance after instance of their malaise and adjustments will be made.  Allowing opponents to out-hustle and out-execute them is not how the Heat have won back-to-back championships.

Six Pacers scored in double figures, led by George’s 24.  Roy Hibbert was an all-star center again today with 19 and nine boards.  Lance Stephenson was good Lance for the majority of the game with 17 and eight assists.  Minus a screwy three-point attempt late in the game as the Pacers led by double-digits with 15-seconds left on the shot clock, Stephenson was very effective.

For the Heat, the story was who didn’t play well.  ESPN’s Mark Jackson claimed during the broadcast that Chris Bosh is a hall of famer, but he played a very ordinary game with nine points and two rebounds.  Bosh came into the game shooting 48% from beyond the arc, but had trouble finding the range as he missed all five of his three-point attempts.

The starters not named LeBron or Dwyane combined to scored 18 points, six rebounds, and nine assists in 85 minutes.

Game Two Tuesday night will not be for the squeamish.  The Heat will unsheathe their swords and battle for their lives, and it’s been a long time since the Heat failed in their effort to take what they wanted in the postseason.

Going down 2-0 is not an option for the Heat, and just as Pacers have proven during the first two series they’ve played  so far, losing the first game of a seven-game series is nowhere near fatal.  Sure, 77% of the NBA teams to win Game One have gone on to win the series, but this team has two of the best players and champions in the history of the game and they are not going to go quietly.

This is going to be a fascinating series with ups and downs for both teams.  Today was an up for the Pacers, but downs are coming.  That is the way playoff basketball works, and expecting something else is lunacy.

The Pacers have not been the most disciplined team in the league, and since January the ups and downs have been severe.  No one suddenly changed who they are today – they just showed their best side simultaneously.

Game Two will be a separate chapter, and the score will start even.  I expect to see a frenetic start from a Heat team intent upon joining a very select few teams to earn a three-peat.  The Pacers will need to match their hysteria and stay in the game early.

Remember, all games start at 8:30 p.m.  Let’s hope the Pacers are ready to play from the tip Tuesday night because the Heat are going to make the Pacers earn a home sweep to start the series.