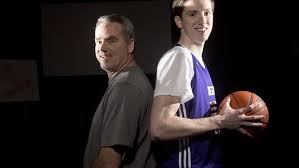 Brad and TJ Leaf – coach and son. Born and bred Hoosier, and maybe a kid on his way to IU.

I always feel a bit silly trying to figure out what’s going on in the heads of 16 year-old basketball players during summer tournaments like the Adidas Gauntlet – Indianapolis that wrapped up yesterday in Fishers, Indiana.

There are players who look good one game and terrible the next, and deciding which represents the real player is almost impossible.

Talking to the kids after a tournament game is completely out of the question primarily because of the odd riffraff that crowd around the kids in whom there is enough interest to compel page views on youtube.com.

“Which way are you leaning?” “What’s your timetable?” and “Do you have a favorite?” are insipid queries that erode my faith in the intellect of humanity, so I steer clear of interviews.

T.J. Leaf played in the tourney, and I watched him play twice.  He looks to be a legitimate 6’9″ at least, can shoot from range, and handles really well with both hands.  He’s not bad defensively, but it was hard to tell because like most teams, his Compton Magic 17s played a lot of 2-3 zone.

Playing up a year is usually a really good thing for a developing player, and Leaf is in the midst of learning that he needs to add some strength.  But Leaf was the smoothest scorer of the dribble I saw in the tournament.  He doesn’t hurry, and can finish with both hands.

Gauging his motor was tough because with five games in three days, no one goes 100%.

So why would a highly touted kid from California have interest in playing in Bloomington?

Some southern Indiana basketball fans will remember T.J.’s dad Brad from his time playing for University of Evansville.  He was a teammate of Richie Johnson, a high school friend of mine, and I always thought he was a fun guy to watch.  A really good shooter and leader, Leaf led the Purple Aces to their first appearance in the NCAA Tournament in 1982.  Leaf was also a seventh round draft pick of the Indiana Pacers.

Today, the elder Leaf coaches his son’s high school team, and T.J. plays a lot like the son of a coach.

Because of the family ties to the area – Brad is originally from Indianapolis, and his mom is from Evansville – Indiana appears to solidly be in the game for this potentially special stretch four.