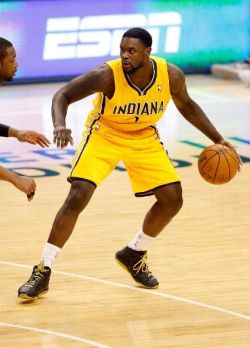 Anyone who thought the Miami Heat were just going to sit back and accept their fate as the Indiana Pacers Eastern Conference Finals punching bag grossly underestimated the two-time defending champs.  Anyone who thinks the Pacers are going to roll over after the series was tied at 1-1 insults Indiana’s resolve.

The Pacers have waited just over 50 weeks for this opportunity, and they aren’t any more likely to let it drift quietly away because of their inability to close a game that very easily could have been theirs.

While the Pacers enjoyed mostly balanced scoring with all five starters scoring in double figures (led by Lance Stephenson’s 25), the Heat’s offense, especially late, predictably came from Dwyane Wade and LeBron James with 23 and 22 points.

James scored only 12 points until just over six minutes remained in the game, but then became engaged in a process he has excelled in so many times before – taking over when it mattered most.  From that point forward, James scored 10.

After a Norris Cole three-pointer with 10:45 remaining, the Big Two scored all 20 Heat points.  And let’s put to bed this ridiculous Big Three talk once and for all.  Chris Bosh has been useless with nine points in each of the first two games of this series.

Minus Stephenson, George Hill, and Roy Hibbert, the Pacers shot 12-of-45.  That just isn’t going to get it done if the Pacers are going to send Miami packing before the NBA Finals for the first time since Wade and James came together in 2010.

For the second straight year, the Pacers bench is lacking against the Heat.  Upgrades like C.J. Watson and Luis Scola were supposed to make a difference, but that didn’t happen tonight.  Paul George scoring 14 points on 16 shots does not reflect the level of offensive efficiency the Pacers need to beat a focused Heat team.

Even with all of that, the Pacers were right there – up three with under five minutes to play.  They just couldn’t close.

So just like the first two series in these playoffs, the Pacers gave away home court advantage with a split at home.  Unlike the first two series, they are now playing against the two-time champs with the best player on Earth.  A win in either Game Three or Game Four is a virtual must, and would then force a best two-out-of-three with a trip to the NBA Finals on the line.

The relevant question is if the Pacers couldn’t close the door in a winnable Game Two at home, how confident can they be if it comes down to the last five minutes of Game Seven with a small lead?

Two chapters into what will likely be a seven-part book, this looks to be a repeat of last year’s incredibly compelling battle to exhaustion.  LeBron said it best in his silly pre-game snoozefest of a pep talk prior to Game One, “They don’t like us, and we don’t like them.”

Acrimony makes for drama, and the feeling that this series is going to get mean-spirited became engrained in my mind throughout the game tonight.

Hibbert’s back, Stephenson is rolling, George had six shots rim out, and the Big Two dominated late.  The last five games are going to be a beautiful war.

Can’t believe we have to wait until Saturday for Game Three.