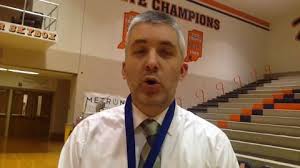 David Baxter is very passionate in representing the girls he coaches at Benton Central, and there is nothing wrong with that.

At issue is a mandate that the girls basketball sliding a week earlier to avoid a conflict with the Big Ten Tournament at the IHSAA’s venue of choice – Bankers Life Fieldhouse – and the boys basketball sectional finals.

Sure, it sounds absurd to people outside of the battle being waged, but if convenience is taking precedent over the needs of the participants, theta seems at odds with what should be the primary goal of the IHSAA.

I think we can file this fracas under – nothing is ever easy.

Thank you for your response regarding the recent decision to move the girls’ basketball season forward a week.  However, after reading your letter, I continue to have major concerns about the negative impact this will have on girls’ volleyball and basketball programs throughout the state. In fact, it is highly evident your decision is unacceptable and a detriment to female student- athletes in Indiana.

First, your belief that girls who participate in both volleyball and basketball could practice both sports during volleyball sectionals week is preposterous. You stated that:  “Girls that are also basketball players will have at least two days of conflict.  It does not mean that those girls (multi-sport athletes) could not accomplish a basketball practice on that Monday or Tuesday but that would take an increased level of cooperation between the school’s volleyball and girls’ basketball coach.”

Mr. Commissioner, it is alarming for you to say it is ok for dual-sport athletes to condition and practice basketball while preparing during championship week of volleyball Sectionals. Your comments were disrespectful to volleyball programs across this state and display a lack of appreciation and care for girls’ basketball programs. I have too much respect for my coaching colleague at Benton Central to even ask for permission to practice the athletes we share during the most important week of her season, and I know that coaches around the state share my sentiments. I also have too much respect for the student-athletes under my supervision to ask them to attend school all day, attend volleyball practice, stay for basketball practice, and then head home and work on school work.

Mr. Cox, do you know volleyball coaches in Indiana who would allow their players to practice basketball during volleyball Sectional week? Furthermore, will you remind and enforce volleyball coaches of your policy and ensure dual-sport athletes are allowed to practice both sports during volleyball Sectional week if the solution is allowed in 2015-2016? Given the unacceptable nature of the requests that you are asking us to make, I am confident that you are not willing to press the issue.

Second, Coach Christlieb asked, “How will this affect the multi-sport athlete who plays volleyball and basketball? Will girls now choose one sport over the other due to the overlap and ultimately hurt both sports, particularly in the smaller schools?”

You replied, “I’m not sure shifting a season one week will cause a different decision made by a student athlete on whether she will choose one sport over another. My sense is that when coaches of any sport make the team experience meaningful, worthy and fun, a student will engage in that activity.”

Commissioner Cox, your statement sums up the main problem with the IHSAA. Decisions are made by people who don’t know the outcome of the decisions they make. They are too distant from the reality of what they are creating and blinded by potential revenue when they should be concerned with the welfare of the student-athletes and the sports they participate in. It is an obvious fact to us as coaches that athletes will be pulled in different directions unnecessarily. For example, students at smaller schools typically play both sports. In my case, 85% of my Varsity team plays volleyball. Even if they lose, it becomes next to impossible to give them any time off before starting basketball.  At larger schools, athletes will consider playing just one sport with this increased conflict. Either way, it’s not good for both sports.

Third, this decision drastically impacts the quality of pre-season and early season practices and contests.  In the chart below, I have visually illustrated the disproportioned ratio of conflicted athletes when comparing boys’ football and basketball to girls’ volleyball and basketball with the numbers you provided.

(The chart did not convert for this post, but displays that the current construct as mandated in the IHSAA changes disproportionately impact girls’ basketball and volleyball, compared to the process that existed prior – or to the overlap between football and boys basketball)

Commissioner Cox, you stated, “For 35 years, member schools have successfully dealt with this conflict and from my personal perspective, I do not believe this conflict has hindered the development or quality of boys’ basketball play in our state for one moment.”

Another problem with your solution is the lack of equality between the length of the girls’ basketball season to the boys’ basketball season. Please look at the winter weeks and count on a calendar. You come up with 15 for the girls and 16 for the boys between the start of the season and the start of the tournament. Here is the link to the calendar.

Commissioner Cox, when you factor in the overlap of girls’ basketball and girls’ volleyball many schools in the association will have roughly a 14 week season. That’s 14 weeks to play 23 games for girls athletes compared to 16 weeks to play 23 games for boys. There is little doubt with the lack of proper pre-season basketball conditioning and a shorter basketball season there is a greater potential for a risk of injury. I would hope the IHSAA would show more concern toward the safety of its female athletes.

Fifth, I am most concerned about the IHSAA’s lack of transparency. You stated, “Finally, I would relate to you that this conversation about the girls’ basketball season has been discussed thoroughly at our area principal meetings with athletic directors and principals. With any decision of this magnitude, we examine as many perspectives as possible.”

The IHSAA failed to listen to the athletic directors and principals at the district meetings. For example, if the IHSAA had listened to their constituents then the recent passing of the two extra games per season would not have been passed. Most principals and athletic directors voted NO. In fact, principals and athletic directors voted overwhelmingly NO.  However, the IHSAA did not heed the advice of the association of athletic directors and principals. Commissioner Cox, can I obtain the voting results from those representatives that attended the district meeting? Perhaps it would provide some clarity if we saw the actual numbers of who voted to support this action and had an understanding of why those individuals felt this was the best course of action. Did the IHSAA do what it wanted regardless of what a majority of association members’ voted? Did the IHSAA clearly communicate, inform, and obtain the perspectives of the girls’ basketball coaches with regard to your solution? It is most obvious coaches were not presented with the complete picture of facts of how the IHSAA planned to move forward with your solution. It is my belief the IHSAA was not forthright and upfront with how they planned to solve the issue of removing the conflict between the girls’ state finals and boys’ basketball sectional finals with girls’ basketball coaches.

In the final analysis, the decision by the IHSAA regarding this move to over-lap girls’ basketball with girls’ volleyball is poor. Before I leave, I offer some potential solutions.