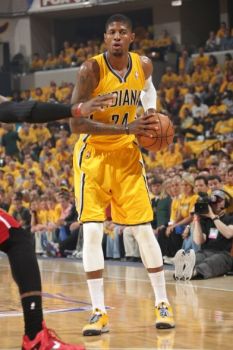 How Paul George recovers from the double ding to his head is the latest subplot carrying conversation among Pacers fans. As with the rest of the series, it will be what it will be.

Hysterical fans should calm themselves because it’s happened before.  Since 2005, the Pacers have played 12 playoff series, and 10 of them started with a split.  The Pacers record in those series is 5-4-1 (the one is the current series).

Unfortunately, the only two blemishes of the six most recent playoff series that began with a split came against LeBron James, Dwyane Wade, and their supporting cast.

That doesn’t mean that the Pacers are doomed to repeat their 2012 and 2013 moment of doom following a split against the Heat.  The difference this time is home court advantage if a Game Seven is necessary.

The seven-game series roller coaster is a ride that Pacers fans should be accustomed to by now.  The ups and downs are predictable only in that they will definitely occur.  That no one knows exactly where should not make them any more stunning.

How the Pacers and Heat get to five-minutes to play in Game Seven will fascinate and enlighten, but the trip to the NBA Finals will likely come in that very brief expanse of time with everything on the line.  Champions are made during those moments – not just for the current season, but moving forward.

Paul George and Lance Stephenson are very young players who are winning and learning simultaneously.  Last year, they learned, along with their teammates, that home court advantage is a big deal.  As a result of the Game Seven collapse, offseason work was more focused.  Were they able to learn enough to overcome opponents who who been around longer and learned more?

For fans, players, and everyone else invested in the success of the Pacers, learning is not the top priority right now.  Finding a way to win another three games before the Heat can is the focus, and as has happened again and again, the Pacers will seek ways game by game to gain advantages necessary to get that done.

Fans can choose to endure the ups and downs by living and dying with every peak and valley, or just ride it out with a smile and a beer until an elimination game is faced by either the Pacers or Heat.  At 3-2, not sweating every possession is no longer an option, but after Game One it was silly to declare an advantage for Indiana, and it’s just as premature to bequeath the series to the Heat today.

Click here to enjoy the best dental care in the world – get your teeth right with Dr. Mike O’Neil at Today’s Dentistry

The media try to gin up angst and drama, especially on off days when there is nothing else to fill time in a compelling way.

My advice is to relax, smile at the wild rantings of Bill Simmons, Mark Schwartz, Brian Windhorst, Doug Collins, Jalen Rose, and the rest of the ESPN circus, and enjoy the games with a good attitude and cold beverage until someone is battling for their playoff lives.

My guess is that the Heat win Game Three, and the Pacers win Game Four and Game Five.  The Heat shoot their wad in winning Game Six to even it at three each before the Pacers take an eight-point lead into the final five minutes of Game Seven.  If they hold on, and I believe they will, a trip to the NBA Finals against San Antonio will follow.

Enjoy the ride, and don’t worry so much.  Leave that to Frank Vogel.