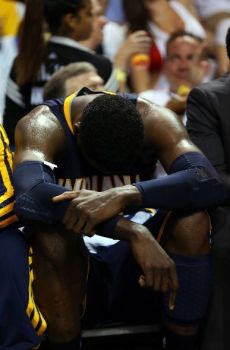 I’m no expert on body language, but this pose from Pacers center Roy Hibbert seems an appropriate companion to a Game Four wrap.

This one was over shortly after it started.  Chris Bosh scored early and often, and the Heat’s defense had intensity the Pacers were unable to match at either end.

Last year, it appeared throughout the Eastern Conference Finals that the Pacers were the better team.  Not so much in 2014.  Not sure what happened after Game One to throw LeBron James into the extra gear no one in the world has, but the Pacers sure as hell wish it hadn’t happened.

Just as the Pacers were the aggressors in Game One, the Heat dominated this one.  The difference in intensity showed itself at the foul line with the Heat making 30-34 while the Pacers were 11-17.

The 12-point final margin game was cosmetically affected by a Pacers run.  After a Udonis Haslem layup made the score 94-71, the Pacers went on a 19-5 run to slice the lead to single digits at 99-90 with 1:29 left.

After scoring in double figures in seven of the last eight postseason game, Roy Hibbert put up his fourth doughnut of the postseason.  It appeared that Hibbert had righted the ship that was the source of such wild speculation, but after tonight appearances appear to have been deceiving.

Whatever positive vibe this group had early in the season is history – long gone.  Whether the Danny Granger trade, Andrew Bynum signing, fatigue, bumps to the noggin, or astrological misalignment cause the fracture of the team chemistry that appeared to be the Pacers chief asset – it is gone now.  Or at least against the Heat, it appears to be.

When playing against two of the best players in the world, good teams can look a little lost, but this malaise appears to be the result of the Pacers effort, not the Heat’s excellence.

Miami hasn’t lost a playoff series in a long time, and it requires intense focus possession by possession to beat them.  Getting back defensively is a must 100% of the time.  Making the Heat pay on the other end for their traps and jumps into the passing lane with quick ball movement is the name of the game to score consistently.  Neither happened tonight.  The result was predictable.

The officiating had nothing to do with the result of the game, but not many whistles came the Pacers way.  A James three-pointer was immediately preceded by an obvious travel, and a mystery offensive foul late on Lance Stephenson when the Pacers had a chance to cut the lead to seven with 3:19 left didn’t help, but if you, me, and and one of the kooks from Area 55 called this game, the Heat still win.

So Game Five comes Wednesday night, and if the Pacers can’t recover the collective will needed to exceed the Heat’s, that will be that.  The Heat will head for their fourth NBA Finals in the four-year run of the Big Two (you can include Bosh as part of a “Big Three” if you like, but he’s Potsy to Wade’s Richie Cunningham and James’ Fonzie), and potentially a threepeat of championships.

If the Pacers are going to claw back into this series, it will take a significant reversal of attitude and focus.  Winning three straight against the team that has just run off three games itself is a tall order, and whatever caused the current three-game run would have to flip on its head because games two thru four were not flukes – they were both the embodiment of what the Heat have become and an indictment of who the Pacers are.

It’s way too early to begin talking about what the direction of the franchise will be following this season.  The offseason roster and coaching discussions can’t start in earnest until the final nail is in the coffin, and that means a fourth loss to the Heat.

Whether that comes Wednesday night at Bankers Life Fieldhouse depends upon what is left in the hearts of this collection that four months ago appeared to be ready to be successful at this level of the playoffs and beyond.

The only way to a Game Seven is with Game Five and Game Six wins.  Do the Pacers have the resolve to make that happen?  The answers will come Wednesday and (if necessary) Friday nights.