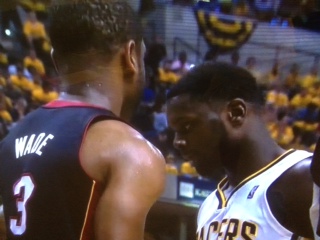 When Lance Stephenson looks down and right as he did after fouling Dwyane Wade, it’s time to recalibrate strategy.

With the Indiana Pacers playing passive basketball on both ends of the floor in last night’s win-or-die Game Five, the Miami Heat enjoyed a 50-43 with 5:48 remaining in the third quarter.  Then, Lance Stephenson awakened.

Not sure the cause, but the first sign of life was a Stephenson foul on Dwyane Wade on Miami’s offensive end.  Stephenson poked the ball from Wade’s grasp, and got a little arm along with the ball – or so the referee believed.  Stephenson took exception, and took a step toward Wade.

You know that little move attack dogs make as they assert dominance – no eye contact, but clear malevolence and a reasonable expectation that any movement will provoke a vicious response?  That was Stephenson’s vibe, and from that point forward in the third quarter, Stephenson brought a level of intensity on both ends that lifted the rest of his teammates.

Amazingly, it was just after the Stephenson foul that ESPN analyst Jeff Van Gundy said, “They (Pacers) like almost need a skirmish to get and intensity and energy from all five.”  That’s exactly what happened.

For the final 5:48 of the quarter, the Pacers dominated the Heat 21-7 to take a seven-point lead into the fourth quarter they never relinquished.

It wasn’t the Lance Stephenson Show either.  Paul George scored eight points, David West five, Roy Hibbert and Stephenson four each, and the defense came alive at all five spots.

Suddenly, Stephenson picked up Wade full court, and the rest of the Pacers worked to tap offensive rebounds back, blocked out consistently, and remembered the level of energy and fundamental consistency needed to compete at a championship level.

During that 5:48, the Pacers notched five offensive rebounds – one more than during three entire games during this postseason when they tied franchise records with only four.  The Heat corralled one team defensive board after a loose ball foul on David West.

Because the Pacers became the aggressor, the Heat became tentative and uncomfortable, and the momentum in the game shifted completely from the Heat to the Pacers.

It helped that the best player in the world, (I think LeBron James has asked that all references to him begin that way, kind of like Michael Jackson was “the King of Pop,” and Joe Dimaggio was “the greatest living ballplayer”). was on the bench during this entire stretch.

Stephenson also spent a little time in the Heat huddle at this point during the game with 1:43 left in the third.  As the officials converged to make sure Ray Allen was the Heat player who belonged at the line, Heat coach Eric Spoelstra tried to chat with Mario Chalmers and Norris Cole.  Stephenson stuck his head in the middle of the discussion to Spoelstra’s displeasure.

Antics like that – as well as the blowing in James’ ear – tend to grab the media’s attention because they are funny and odd in the middle of a dramatic closeout game, but the real difference Stephenson made in this game came in the final 5:48 of the third.

Games can turn on a single moment.  Players can come alive in the blink of an eye.  This series continues to a Game Six tomorrow night in Miami because Stephenson found a reason to dig deep and assert his estemable will and competitive fire, and the rest of the Pacers were caught in his wake of energy.

Stephenson was vilified in the media for “poking the bear” as he discussed the trash talk in which he and James engaged earlier in the series.  Well, someone on the Heat should take responsibility for poking Stephenson because if he hadn’t come to life, this series would be over.