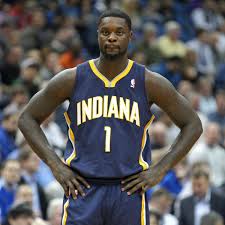 Lance Stephenson is going to be a very wealthy 23-year old in a couple of months. I hope it’s for the Indiana Pacers.

For nearly the entire season, I’ve been undecided about whether Indiana Pacers guard Lance Stephenson should be back next year and beyond, but when the team rallied behind his defensive intensity in the third quarter of Game Five against Dwyane Wade and the Miami Heat, he showed exactly how important he is.

When drafted, I thought Pacers president Larry Bird made a terrible mistake.  Stephenson had displayed an alarming dearth of impulse control as a youth near Coney Island, New York and with the University of Cincinnati – the type of guy who thought the world revolved around him.  Basketball is a game that usually rewards players who embrace a team-first mentality, and that was clearly not a tool in Stephenson’s arsenal.

Stephenson seemed to be a kid with great physical gifts and a determination to prove himself worthy of respect through personal accomplishment.  Guys like that are usually better suited to playground games, but Bird saw something in Stephenson that he thought made him worth moving up in the 2010 NBA Draft from the 40th pick to draft him.  No takers for an offer, the Pacer sweated it out until the 40th pick and grabbed the enigmatic Stephenson.

The process to educate the physically talented Stephenson began, and last season he finally blossomed.  Is he perfect?  No.  Can he still revert to the selfishness that repelled teams that refused to draft him and teammates who made no secret of their disdain for him?  Sure.  Does he make headlines for silliness like blowing in LeBron James Wednesday night?  Yep.  Did he spend too much time thinking about and playing for the contract he will receive after this season.  Absolutely.

When Roy Hibbert said, “(There are) some selfish dudes in here,” he was talking about Stephenson, who stole rebounds from teammates, expressed grief when teammates passed up open shots on passes that would have become assists for him, and stalled the offense by trying to break down his defender.

Would the Pacers be a happier team without the iconoclastic Stephenson?  Probably.

Do the Pacers rise up and smite the Miami Heat in Game Five of the Eastern Conference Finals without Stephenson?  No chance.

The name of the game in professional sports is winning, and Stephenson is a significant cog in the machine that has caused the Pacers to win back-to-back Central Division titles that preceded trips to the NBA’s Final Four.

Without Stephenson, the Pacers are a group of nice guys willing to try most of the time.  For all his wonderful talent, Paul George is not a hard-edged competitor.  David West has the best scowl in basketball, but he’s not always a driven competitor.  Roy Hibbert?  Projecting his level of toughness from game to game is pointless.  Based upon on-court and locker room behavior, all three are men you would be proud for your daughter to date.

Stephenson brings a level of malevolence that is key to competing for championships.  I’ve heard media people like ESPN’s Mike Wilbon describe Stephenson as “crazy” over the last 24 hours, and not in the complimentary sense.

My sense is that Stephenson isn’t crazy – he just doesn’t take himself so seriously, and indulges his id without great concern for consequences he finds meaningless.  What is meaningful for Stephenson is enjoying basketball, and when he finds a personal motivation to excel, few are better at the game.

After practice yesterday, he seemed genuinely baffled by the barrage of questions about blowing in James’ ear.  To him, it was a meaningless moment of fun, and seeing it blow up into a worldwide leader sensation is much nuttier than the initial act itself.

Over the last four years, Stephenson has grown from an isolated and immature teammate who alienated everyone into a functional and key member of a team whose only weakness has been an inability to beat the two-time world champion.

Every great team needs an irritant to keep it from becoming comfortable and complacent.  For the Pacers, that guy is Stephenson, and for all the weirdness and playful (sort of) antics, this post would be about how the Pacers will attack the offseason if not for his presence.

Stephenson is a guy worth another roll of the dice.