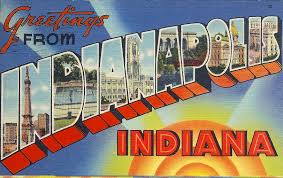 The Big Ten made a few smart calls today by announcing the conference football championship will be played in Indianapolis at Lucas Oil Stadium through 2021, and that the women’s basketball tournament will be held at Bankers Life Fieldhouse from 2017-2022.

When a city has been built specifically as a host site for big sporting events and conventions, it makes sense for organizations to use it often.

Sadly, the Big Ten also determined in its infinite wisdom to send the men’s basketball tournament all over the damn place.  It will be held at the United Center in Chicago this season, return to Bankers Life Fieldhouse in Indy for 2016, and then inexplicably roll out to Washington DC in 2017.

I know Maryland and Rutgers are entering the Big Ten next year, but in the glacial world of collegiate sports I would have guessed their first year of enjoy the fruits of membership would have been reserved until 2027 at the earliest.

Maybe Chicago and Indianapolis split the lion’s share of hosting for the men’s tournament because the Big Ten offices are near O’Hare Airport in the Chicagoland area, and commissioner Jim Delany doesn’t like being questioned by Mayor Rahm Emanuel and his cronies why quant and way-to-nice Indianapolis keeps getting bites at this apple at the expense of the Windy City.

Delany would rather capitulate to the assorted boobery of Chicago’s elected elite than do the smart thing – allowing fans and sponsors to be treated with a degree of of warmth and consideration in a city that enjoys its role as host of a great party.

I grew up in Chicago with a family that extends back more than a century on both my mom and dad’s side on the north side and northern suburbs, so when I write about Chicago being a place filled with so many complicated and nefarious elements they are impossible to list, it’s from experience.

And as someone who has lived in Indianapolis for 21 years, I can write about the genuineness, decency, and logic that imbues virtually all who live here.  Complexity is not embraced in Indianapolis.  It’s a city laid out simply with people who don’t treat every moment of their lives as a competition.

Cranky is a nice way to describe Chicagoans, but psychotic isn’t too strong, especially between November 1 and April 1 when the sun is almost entirely absent behind ever-present clouds.  My aunts and uncles were cranky Chicagoans.  They described their friends, enemies, and each other as insane.

“Welcome to Chicago – leave your money and get on your way” should be the city’s slogan.

Indianapolis has its flaws, but they pale in comparison to Chicago’s.  Indianapolis knows it’s a pretty good city, and is happy with being pretty good.  Chicago insists it is a great city, and with the exception of those magical cloudless  summer days at Wrigley Field, North Avenue Beach, and the Sheffield Garden Walk, or a night at Kingston Mines for blues or The Second City for comedy, it’s an unholy mess that rewards the relentless parade of elected pigs at the trough at the expense of people who work in the “City that Works.”

So Chicago gets to split with Indianapolis because no one has the temerity to tell the truth to Emanuel and his lackeys.

At least fans get to enjoy the football championship, the women’s basketball tourney, and the men’s tourney every other year with the exception of the bizarre trip to DC in 2017, and the still to be named host in 2018.  In the world of collegiate athletics, that counts as a work of genius.

By the way, the unnamed site in 2018 is going to cause all kinds of speculation about further Big Ten expansion.  Nothing I love more than conference expansion speculation, and I know it’s Delany’s favorite topic.

4 thoughts on “Big Ten Tournaments and championships returning to Indianapolis, but not often enough”