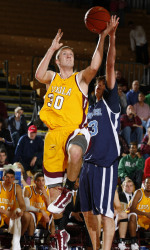 This photo captures one of the 11 two-pointers Ryan Sterling scored in four years at Loyola-Chicago. I do not allow him to shoot twos in EA’s NCAA College Basketball.

It was kind of cool to go buy EA Sports College Basketball video game for PlayStation and play as the Loyola Ramblers.  My son was a Rambler from the 2007-2008 season through 2010-2011, and coach Jim Whitesell didn’t play him a lot.  I did – and do.

Sure, I usually lose, but Ryan always leads the team in scoring and because I never had him pass the ball, every offensive set ends in a Ryan Sterling three-pointer.  With me at the controls, Ryan finally got to shoot as often as I wanted in every game he actually played.

Because his likeness was appropriated, according to a settlement between EA and a group of plaintiffs in a lawsuit filed by former UCLA Bruin Ed O’Bannon, Ryan and every other college football or basketball player whose likeness was used in an EA game will complete an application and wait for their payment to be processed.

Depending upon the number of former players (totaling over 100,000) who take the time to fill out the paperwork, it is estimated each will receive between $48 and $951 for every season his image was used in a game.

As is the case with all lawsuits of this type, the big winners will be the attorneys who represented the players.  They will take roughly one-third of the settlement for their trouble in getting players a max of $3,804.

What does all of this mean for the NCAA and universities?  Nothing.  That suit is separate from the litigation against EA, and will result in another payday for athletes, if the plaintiffs prevail.  There is speculation about the total of the settlement that could be reached with the NCAA – around $100 million plus changes in the rules regarding image capitalization for schools.

The NCAA released a statement yesterday to ensure current athletes receiving compensation as part of the EA settlement will not result in any penalty from the NCAA.

For generations, schools have forced athletes to sign away the rights to use of likeness as part of participation, and for 99% of players, it meant virtually nothing.  There are no lines at the Indiana University bookstore for Austin Etherington jerseys, if any were produced.  At most NCAA D-1 schools basketball jerseys are not available for sale at all, and only the most popular four or five football players at the most big schools have their jerseys mass produced.

But for players like Johnny Manziel or Robert Griffin III, Texas A&M and Baylor made a lot of real money from the sale of jerseys, and this lawsuit is designed to address the inequities caused by the predatory rule that actually impacts few.

While dissent is understandable among those who see this lawsuit as a gesture of ill-will toward schools that provide an education and a lifetime of memories in exchange for the endless hours of work invested by athletes, it’s also part of the “take it or leave it” mentality of universities toward athletes that has been loudly criticized.

Until recently, college athletics was a quaint oasis of kids playing for the love of the game, and coaches as mentors similar to professors.  When huge TV money started to pour into university coffers during the 2000s, coaches got rich, vendors got rich, and administrators got rich.  The only participants in the business model not feeding at the trough were the athletes.  That is about to change.

The trial portion of the lawsuit against the NCAA will begin June 9, unless a delay sought by the NCAA is granted.

In the meantime, my son will complete paperwork necessary to receive a check that will either pay for dinner at a swanky restaurant or fund a week in Cabo.

As for me, I’ll keep trying to find ways to get Ryan open on the wing to hoist up another three-pointer.