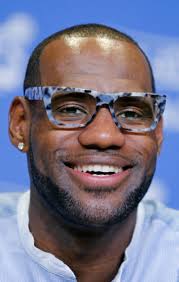 Whatever and whoever this is, many fans don’t trust it, and that makes it unlikable.

There is something strange about LeBron James.  His public persona appears forced, and sports fans don’t care for guys who try to put on a happy face away from competition while being a killer during it.

Isiah Thomas’s smile is another contradiction that we never embraced.  There was no doubt what Isiah was all about, and it was never to be liked.  Whatever he needed to do to gain an advantage is exactly what he did, and when it became clear that he could no longer assert his will to win a championship, Isiah retired.  The smile was a facade that no one ever trusted.

With LeBron, he appears to be an awkward guy, uneasily shoehorned into a persona designed to maximize his marketing potential.

His pre game speeches are clunky and passionless, kind of like a speech class assignment given to the kid who never talks otherwise.  The video bombs that have become so annoyingly unfunny show him (as well as Dwyane Wade and Chris Bosh) as an unwieldy participant in someone else’s game, as though an agent or media relations guy told him to have some fun and show personality he sadly does not have.

It all appears disingenuous to sports fans.  The nice guy stuff makes all kinds of sense from the perspective of those trying to market a friendlier image than what LeBron shows on the court.  He’s a super-physical brute without remorse as he throws his singularly stout and athletic body into that of a defender with lesser gifts.

The smiley, glasses-wearing jokester minus a sense of humor appears to be a conscious concoction, and fans don’t like concoctions.

Granted, if LeBron walked the streets like he runs the floor, people would shudder in fear, and there is little cash available to pay those who scare the hell out of us as they endorsing products.  So I get it, but the result is a complete lack of trust in the image being presented.

“Real” and “honest” only plays when the person is likable, and because we are only allowed to see the facade, discovering and embracing LeBron’s personality just doesn’t happen.

To his credit, none of that appears to matter to LeBron.  He wins championships, puts Dre on hold, drinks Powerade, and manages his image with the same attention to detail as he uses to prepare to beat the Indiana Pacers and San Antonio Spurs.

His only real misstep was the abject stupidity his “announcement” represented.  Anytime a sports figure aligns himself with disgraced sportscaster Jim Gray, the result is going to be a nightmare, but it appears that lesson has been learned.  The next time LeBron decides to take his talents to wherever, I doubt Gray is allowed in the building or a part of the planning.

Being liked is not always an option for an iconic player or brand, and in the world of media a talent being disliked is often a positive as long as the throng of haters is equalled by those who pledge their devotion.

LeBron is never going to be loved like Michael Jordan, Larry Bird, or Magic Johnson.  Magic has a million megawatt smile, and played basketball with a unique joy and generosity.  Michael seemed as shocked by his own genius as fans were, and Bird was a great player who looked like a lot of the people who bought tickets.  LeBron is a linebacker among graceful receivers and running backs.  We love our linebackers like Dick Butkus or Lawrence Taylor – rampaging beasts who maim.

Being the best doesn’t automatically lead to affection, and the continued examination of why LeBron isn’t beloved is a silly exercise because excellence and charisma are disconnected concepts that don’t always intersect.