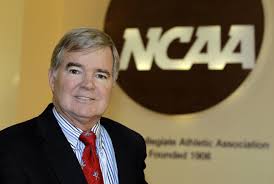 98% of what the NCAA does is wonderful. The other 2% are what Emmert testified about yesterday.

NCAA President Mark Emmert has been dealt a bad hand – the kind of hand that Phil Ivey could not bluff into a winner.  He is forced to spew blather that defies logic in an effort to perpetuate the bold lie of amateurism in collegiate sports.

As the head of a member institution that churns cash and marketing heft for universities, it’s up to Emmert to try to make the unreasonable status quo appear reasonable when, of course, it’s not.

Coaches, administrators, trainers, broadcasters, bowl committees, and conference leaders make millions of dollars while the athletes who do the heavy lifting enjoy the fruits of three hots, a cot, and access to education.

That is the construct Emmert defended yesterday when he testified in the Ed O’Bannon lawsuit in Oakland, California.  O’Bannon brought the suit because he believes that athletes should be allowed to profit from the use of their image, just as every other adult in America does.

This affects only a small percentage of student-athletes, but the right to build and capitalize on our own brands is a fundamental right in America, and forcing an 18-year old to sign it away is an indefensible intrusion on his ability to earn.

No one wants to buy a #21 Purdue Boilermakers jersey, except the family and friends of the kid wearing #21, but for an athlete like Johnny Manziel, Texas A&M was allowed (and remains allowed) to reap significant wealth from the sale of a jersey with #2 on the front and back.

Universities argue that numbers do not equate to the exploitation of a specific athlete’s image, and they keep a straight face while doing it.

What Emmert is really protecting athletes from is cash – a gesture that not a single athlete has ever asked to receive.  Where does all that cash go?  To the member institutions that run the NCAA.

The NCAA has always been a den of hypocrisy when dealing with big money programs, but as the cash has grown to mirror that of the major professional leagues, the defense of amateurism has become more and more hollow.

A quick look at the NCAA D-1 Maunal spells out the silliness in black and white, “Student-athletes shall be amateurs in an intercollegiate sport, and their participation should be motivated primarily by education and by the physical, mental and social benefits to be derived. Student participation in intercollegiate athletics is an avocation, and student-athletes should be protected from exploitation by professional and commercial enterprises.”

Oh well, okay.  If it says that in a manual prepared by smart guys, it must be true and right.

What I would like to ask Emmert is why intercollegiate athletics are an avocation for the “student-athletes” but a very lucrative vocation (or profession) for coaches, conference leaders, and administrators like Emmert, who makes $1.7 million per year for running the operation that continues to keep athletes for earning dime one for their on-field exploits.

If the primary focus of football and men’s basketball is in helping build a functional adult as part of the educational process, why are coaches paid so far out of line with the professors who teach classes that are similarly focused?

John Calipari is not being paid an average of $7.5 million per year for the next seven years because of the level of human being he launches into society each year.  He’s being paid commensurate to his worth in generating exposure and wealth for the University of Kentucky.  Players should be valued similarly.

Or at the very least to be allowed to profit from the use of their own image.

Click here to learn more about the most caring dentist in Indiana – Dr. Mike O’Neil at Today’s Dentistry

College Football and College Men’s Basketball are de facto professional leagues that operate with the same revenue streams that benefit NFL, MLB, NBA, and NHL teams, and all thrive financially based upon business models that compensate players, and allow for individual and collective deals with athletes for the use of their images.  To argue that a similar construct would cause the collapse of collegiate athletics as we know it is fallacious.

What it would do is redistribute wealth away from coaches and administrators, and although Emmert would never admit it, that is exactly what he argued against yesterday.