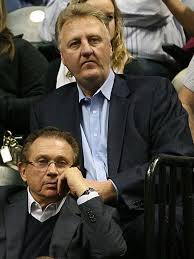 Herb Simon and Larry Bird may make some noise tonight, or they may stand pat. We will learn something about their plans for 2014-2015 either way.

“In 29 cities, the 2014 NBA Draft holds promise for improvement, but this is Indiana!”

Of the 30 NBA franchises, the Indiana Pacers will wait in line behind all but the five teams without any picks at all for their chance to make roster improvements.  Dallas, Brooklyn, New Orleans, Portland, and Golden State will have even duller draft nights than the Pacers – barring trades.

Pacers president Larry Bird will take calls as teams are eager to trade, but the motivation around the NBA for deals appears to be to clear cap space to join the bidding for LeBron James, Carmelo Anthony, and lesser free agents.

The Pacers aren’t a great partner for deals that would help teams accomplish that as they have cap issues of their own, but that doesn’t mean Bird won’t pull the trigger on a deal.

Barring a trade, the Pacers will sit around waiting to make what will very likely be an irrelevant selection to all but the kid who is picked.  For him, it will be a thrill.  For fans, it will likely result in a collective “Who?”

Of the past 15 men chosen with the 57th pick, only Manu Ginobli and Marcin Gortat have risen to a level of importance in the NBA.

It’s not like the Pacers are completely wasting their breath as they utter the name of their guy, but there sure as hell won’t be a press conference tomorrow in the grand entrance of Bankers Life Fieldhouse to introduce the kid.

Even if the Pacers held on to the pick that Phoenix now holds at #27 (the result of the trade that brought Luis Scola to Indiana last offseason), the odds of netting a player there who would provide short-term help would be very long.  While experts claim this is a good draft, the 27th pick is going to allow the Suns to choose from players like Jerami Grant, Kyle Anderson, and Artem Klimenko.  Maybe one of those guys will be an NBA all-star, but the odds are against it.

Today will be interesting for Pacers fans because inactivity will likely mean a 2014-2015 with the core of the two-time Central Division champs returning intact for another run.  A trade of key parts will mean retooling has begun.

The season was not good enough for fans lured into building wildly high expectations by the fast start, or front office staff who continually said that the goal was a trip to the NBA Finals, but there are 13 teams in the East who would swap spots with the Pacers right now.  If LeBron James bolts from Miami, that will add a 14th team that would happily exchange recent pasts, presents, and immediate futures with Indiana.

Tonight might be boring for the Pacers, but winning draft night again and again has done very little for teams like Portland and Cleveland.  Winning doesn’t count until Late October.