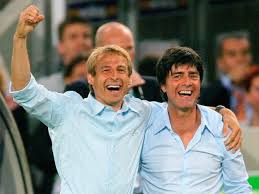 Jurgen Klinsmann and Joachim Low were compatriots for years. Today is not the time to become rivals.

To hell with all this talk about winning against Germany today at Noon.  The win for the Americans is to advance to the knockout round, and the draw that can force it should be the focus.

It would be nice to beat the team ranked second in the world, but after the debacle that led to a tie against Portugal, the Americans need to hone their attention on the task at hand, and that is to find a way to not have to pack for home after today’s game.

No one within FIFA or anyone outside of Portugal and Ghana has any reason to complain if the Germans and Americans play patty cake in the middle of the pitch while the ball sits still and the clock continues to tick toward the 90th and final minute.

With a draw, both the Germans and Americans win.  By competing, the chances increase for someone to lose, and with a loss the Americans could find themselves on a plane home shortly after the game.

There are weather issues in Brazil.  Flooding rains have rendered the field very close to unplayable, so officials will determine whether they will postpone the most anticipated soccer game by American fans in history.  The wet conditions can pose an increased risk of injury, so to play full out might be penny foolish and pound stupid regardless of the result.

Klinsmann and Löw should have already huddled in the back of a dark Brazilian bar over a couple of the Warsteiners that the Germans packed along with their lederhosen and dirndls to haggle over the terms of mutually assured success.

With a win, the Germans will win Group G, and the resulting loss all of a sudden puts the American’s future in doubt.  The result of the Portugal vs. Ghana would become the determining factor for Team USA’s future.  A draw between Portugal and Ghana would put USA in the knockout round.  A Portugal win would almost certainly move the Americans forward because of the goal difference tie breaker (unless Portugal crushes Ghana and Germany routs the US.  A Ghana win, coupled with an American loss would be trouble.

Rolling those dice with those odds is how a lot of people go poor at the craps table.  That’s why Klinsmann should gather his chips and walk away before the table gets cold.  The risk is too great if the Germans are willing to play ball.

Every game the Americans play fills bars back home with young men and women figuring out exactly why soccer is the most popular game in the world, and that means part of the discretionary cash being spent on tickets to watch other sports will funnel to soccer.  That’s a huge deal for teams like the Indy Eleven trying to gain a foothold in a town fixated on the Indiana Pacers, Indianapolis Colts, and universities who play football and basketball with varying degrees of success.

Click here to earn a spot as a patient of the best dentist in Indiana – Dr. Mike O’Neil at Today’s Dentistry

Today is a day to watch soccer on a very soggy tract of immaculately manicured grass, and the best result for both Germany and the United States is to move on to the knockout round, regardless of how it’s accomplished.

When a draw is a win, cut the deal, shake hands, and send the Portuguese and Ghanans home.  Then, order a third Warsteiner.

For those who say there is no dignity in shared concession, and competing to win is the only acceptable act in athletics, remember that the indignity of coming home before the knockout round after being less than 30 seconds from picking up an additional two points to seal the deal against Portugal would be worse – much worse.