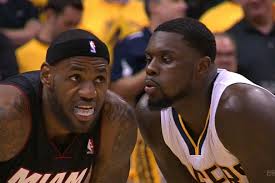 These hi jinx can annoy those inside and outside of the Pacers locker room, but I loved Stephenson’s playfulness.

Lance Stephenson was drafted by the Pacers after every team picking in the top 39 of the 2010 NBA Draft passed on the mercurial talent out of Coney Island by way of the University of Cincinnati.

Today, Stephenson will begin the real work of deciding whether he will sign a deal to continue his career with the team that embraced his talent and politely encouraged his maturity or jump for more money.

The Pacers are not allowed to spend beyond the luxury cap threshold, and that means team president Larry Bird will be restricted as to how much of owner Herb Simon’s cash he can throw at Stephenson.

Stephenson might jump to the highest bidder after putting together his best season yet.  All that talent and promise is developing, and it leaves many wondering where the ceiling might be for the guy who has been the most talented player on the roster since he walked through the door at Bankers Life Fieldhouse four years ago.

Some see a comparison with Ron Artest as a reason to balk at signing Stephenson, but I think the Artest/Stephenson equation is spurious.  They share several traits in their backgrounds, and play an enthusiastic and brash brand of basketball, but I have never thought Stephenson to be mentally unstable or ill as has been the case with Artest.

Does Stephenson selfishly poach rebounds and react angrily when a teammate refuses to shoot after one of his passes that might have resulted in an assist?  Sure.  He can be petulant and myopic, but if he can continue to move forward as far over the next four years as he has the last four he has a chance to be a star and champion.

If the Pacers are unable to sign Stephenson, the guys on the roster might get along a little better, but since when is that a prerequisite for success?  For each championship team that loves each other, like the 2013 Boston Red Sox, there is at least one that couldn’t stand the sight of one another – the Oakland A’s of the early 1970s come to mind.

The Pacers would not be nearly as talented without Stephenson regardless of who they sign, and as so often is the case, the devil you know beats the devil you don’t.

Talented devils are in short supply this offseason despite everybody and their brothers opting out of player options.  LeBron James, Dwyane Wade, and/or Chris Bosh are not coming to the Pacers.  Carmelo Anthony isn’t either.  Dirk Nowitzki is staying in Dallas.  Pau Gasol is going somewhere else.  Eric Bledsoe is restricted and unlikely to move from Phoenix.  Chandler Parsons is likely not going anywhere, and would likely cost as much if not more than Stephenson for less productivity.

Gordon Hayward is a restricted free agent, who might be offered the max – which is outside the Pacers budget.  Luol Deng?  Trevor Ariza?  Shaun Livingston?  None offer the current all-around game or future promise of Stephenson.

Not signing Stephenson would almost certainly result is a step away from championship level basketball for the Pacers – hence Bird’s keen interest in getting the deal done.

Stephenson as a Pacer for life is best for everyone involved, but lots of money tends to skew vision toward the silly.