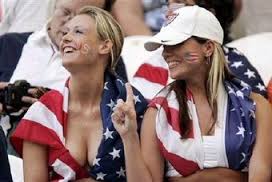 Is it any wonder American soccer fans were as popular in Brazil as they are right here at home?

Like cicadas, the din of summer noise made by fly-by-night soccer fans returns at very regular intervals – every four years when the World Cup is played.

This year it came with a vengeance as the event is being hosted in the western hemisphere so watching games starting in the afternoon or early evening is very convenient.  It also comes after a mandate that ESPN use a soccer highlight in every Top Ten Plays segment, which has showcased the sport’s very best.

Just as the soon to perish cicadas lay eggs that sit dormant for another span of years, soccer returns to the underground safety of niche sports as soon as the Americans lose.

The crowds that packed Mass Ave., Soldier Field in Chicago, and many bars have now dispersed to live their normal lives unencumbered by the siren song of day drinking.  The urge for nationalistic flag waving will unfortunately recede until the 2016 Summer Olympics back in Brazil – the host country of this World Cup.

Yesterday’s revelry that crashed followed the Americans losing a 2-1 thriller to Belgium is gone.  Soccer is once again resigned to the back pages of sports magazines and the corners of niche bars that cater to European nationals and fashionable iconoclasts who refuse to embrace the collective and relentless furor surrounding college and pro football.

Don’t get me wrong.  I like soccer very much.  I played in high school at a reasonable level.  My team should have won a state championship when I was a junior, and we were probably the second best team in Indiana my senior year.  I was All-KHSSA, whatever the hell that means.

I argue with those who claim a lack of scoring in soccer is problematic, as it isn’t the number of goals scored, but the narrow scoring difference in a game that creates drama.  A 107-74 basketball game is much more difficult to watch from start to finish than a 1-0 soccer match.

Drama in soccer is relentless with no timeouts or replay challenges.  Yesterday’s game between the United States and Belgium was scheduled to start at 4:00p, and it went off 15 seconds late.  When completed in regulation, a match takes just less than two hours.  I love that.

Soccer fans who try to figure out why we watch college football games that take up to four-and-a-half hours have better reason to be baffled than football fans who don’t get soccer.

All that said, soccer fans will again number in the dozens and sit quietly at bars like the Chatham Tap in Fishers watching Premier League games between Arsenals and Man U.  They sip their Harp, Bass, or Guinness and silently mock those who don’t get it.

If there is an evolution toward a bonafide and sustainable soccer footprint in the United States, it’s glacial.  Every four years, people claim soccer is about to hit its tipping point, but it never really gets there.  Back in the late 1970s, The NASL was a pretty big deal with international stars like Pele, Giorgio Chinaglia, and Franz Beckenbauer.  Stadiums were filled, and then as quickly as soccer exploded, it faded again.

The surges and recessions are repeated again and again.  Professional leagues are launched, succeed briefly, and fail to gain traction.  The MLS seems to have found a way to continued moderate success, and hopes for the new NASL with the Indy Eleven are high.

Click here if you are ready to make great dental health a priority – at Dr. Mike O’Neil’s Today’s Dentistry.

I would love for soccer to reach a hockey-esque status, but I’m a dreamer who still believes that greed as the American driver of effort will pass, and that the federal government will begin to work for us rather than the other way around.

In Europe, they don’t get baseball and football, and here we don’t get soccer – at least not in bulk.  That’s life.  Soccer fans need to enjoy their favorite game’s ascent into lead story status every four years.  Americans may not love soccer enough to make it a 12-month a year passion, but they know a great party, and the World Cup brings that every four years.