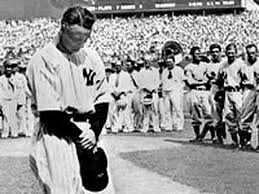 75 years ago today, Lou Gehrig believed what should be true for all – that we are each the luckiest people on the face of the earth.

Today, baseball pauses to remember one of its greatest moments and greatest players on the anniversary of his most memorable act.

It’s also one of its saddest.

Gehrig, the portrait of invincibility.  The standard of consistency.

Yet, a weird mix of frailness and immortality. A two-piece puzzle wrapped so tightly it’s stunningly clear.

He played on six World Championship teams, was twice named the American League MVP, won the triple crown in 1934, and built a career batting average well above .300 and of course that consecutive game record, 2,130 straight, that stood for more than 50 years.

A mountain of a man in his integrity and leadership, but also in his resilience. So much so that sportswriter Jim Murray called him “a Gibraltar in cleats.”

That summer, 75 years ago, The Iron Horse addressed 50 thousand strong at Yankee Stadium.

The words, “I consider myself the luckiest man on the face of the earth,” still echo in our minds even though we weren’t there.

No preacher could craft a better lesson. The mortally ill Gehrig gave a thank you, not a self-eulogy.  A gracious, humble presentation about the true joys of being able to play a kid’s game, to be able to play for the arguably the greatest team of the era, if not all baseball history.

Some say he didn’t know the gravity of the condition, and there is evidence of that. His wife Eleanor, allegedly told doctors who diagnosed him at the Mayo Clinic, not to share all the details. He know his career was over.

The full diagnosis, at the age of 36, Gehrig was in the stages of then relatively unknown disease called ALS – Amyotrophic Lateral Sclerosis. A disease that would rob him of his nervous system and muscle control, but would eventually take his name.

But, even in his most basic understanding he knew was at least crippled and physically impaired. By whatever measure he knew,  it was punch to the gut and kick to the pants to even the strongest positive attitudes.

Then almost as suddenly as he was he was thrust into the lineup, well, permanently that June afternoon in 1925. Sixteen years, precisely to the day, June 2, 1941, he died.

Why is the story so important to us?

We love what his courage represents.  We envy his fortitude.

That’s why we love the Gehrig story so much.

Its about a guy who was just happy to be playing in his hometown.  A man who understood his own role as a hero to kids and adults a like. And if he said he was lucky to be alive, you better believe he meant it.

Of the four Gehrig kids, he was the only one to live through childhood.

He didn’t complain about not getting the spotlight of Ruth – arguably he meant more to the team and baseball than the Sultan of Swat.

An alien attitude in an age that professional athletes seeming have larger incomes than the gross national product of some third world countries.

Even to end Gehrig was the good soldier, just doing was he was asked.

Maybe that’s why we love the story and the man, because he is unlike anything we see today or will ever see again.