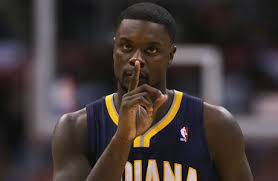 Lance Stephenson should ask an advisor to speak up and guide him back to the Pacers because focusing upon his next deal in 2019 is the smart play.

A perfect friendship, marriage, or business partnership involves an elevation of both sides because of their involvement with the other.  That describes nicely the mutually beneficial relationship between the Indiana Pacers and unrestricted free agent Lance Stephenson that has flourished over the past four years.

Nowhere would Stephenson have been allowed to mature in the way he has with the Pacers, and the Pacers were never going to be able to draft a more talented player at #40 in the 2010 NBA Draft.

They were meant for each other.  Talent thirsty management with the Pacers found an abundance of athletic gifts in Stephenson, and Stephenson felt a measure of trust and support from teammates and his bosses for the first time in his life.

That Stephenson would throw that away for a couple of million bucks would bring a wrongheaded end to a harmonious relationship between player and team.

Stephenson needs the structure and tolerance that coach Frank Vogel and team president Larry Bird provide, and the Pacers need the grit and explosiveness Stephenson brings to a team filled with quiet players who need to be prodded toward aggressiveness.

As Stephenson and his agent wait out the nauseating posturing of the LeBron James camp as he corners the media market with rumors of a return to Cleveland now driving news consumption, they hope for a team to make the crazy offer that will dwarf what the Pacers have put on the table – five years, $44 million.

Teams like the Chicago Bulls, if they lose out on Carmelo Anthony, will have the cash to lure Stephenson by offering a beyond market value deal.  They will also want to give fans a reason to focus on what has been gained rather than what was lost during this wacky free agent period.

Stephenson is not quite worth the $8.8 million average per season the Pacers will pay Stephenson, if he accepts.  But the upside is substantial if Stephenson can continue to improve his skills and decision-making both on and off the court in the same measure as he has over the past four years.

From the time he was a rookie, many within the Pacers organization have believed that Stephenson is the most talented player on the roster, and they say it isn’t close.  That upside makes a five-year deal worthwhile, but a dime more would be bad business for the Pacers and Bird.

Bob Kravitz of the Indianapolis Star wrote it this morning – the Pacers should hold firm.  He’s 100% right, as he often is.  Fair is fair, and $44M over five years is fair for someone whose behavior wobbles and wavers erratically.  His selfishness is not appreciated by some equally self-centered teammates, but that doesn’t mean his stat padding isn’t understandable.

I’m sure Lance looked at the cash being devoted to Roy Hibbert and felt, “Well, he got his, so he doesn’t need any more stats.”  That feeling gave Stephenson permission to poach rebounds.  Because he grabbed boards that otherwise would have fallen uncontested into the hands of Pacers bigs, he was the leading rebounder among guards in the NBA.

None of the stolen rebounds helped the Pacers win a single game, but they do make for compelling ink in fortifying Stephenson’s case for more cash.  Stephenson is lacking in a couple of behavioral areas, but street smarts isn’t among them.

Basketball is a business, and making a lot of money is the point for the vast majority of players in the NBA, so begrudging Stephenson his selfish moments of stat padding to lift his status should be forgiven.  This isn’t high school basketball where playing for the old alma mater is the point – it’s the NBA where the poor go to cash checks otherwise unimaginable.

This contract is not the bounty that should capture Stephenson’s imagination.  The next one that should net him better than $20 million per year is what his agent should be talking about, and another five years in Indy are the best place to make that deal a reality.

Settling for the short money is for chumps, and someone close by should mention that to Lance before he sidesteps that deep pile of cash that waits for him in 2019.