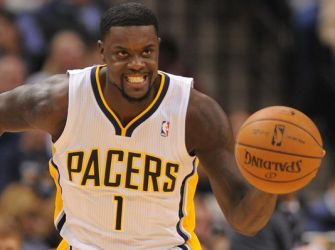 So what do the Pacers and team president Larry Bird do with Lance “Born Ready” Stephenson? It seems everyone in Indianapolis has had an opinion on this the last few days, and I have mine.

I don’t see that the Pacers have much of a choice but to re-sign Lance Stephenson. I don’t see a good alternative, do you? So the Pacers may not be able to afford to keep Stephenson in the very early and still developing stage of his career, but they can afford Roy Hibbert for $14 million?

When Hibbert was a free agent a couple years ago, I suggested to a group of people that it wasn’t a no-brainer, open check book decision to match Portland’s $14 million per year offer. Sure, Hibbert was better than the $3.5 million  he was making at the time, no doubt. But a max $14 million player? The reaction to my comment was that I was nuts for even considering that it was a tough decision.  To most casual fans, dollars don’t matter and there is no such thing as a salary cap or luxury tax in their world. The fact Hibbert was going from $3.5 million to $14 million made no difference. Pay him whatever it took to keep him, the Pacers had to have him at no cost. I’m not saying it was the wrong decision at the time (Hibbert was huge in the 2013 playoffs), just that it wasn’t a no-brainer. In fact, it was the right decision at the time, though a tough one.

Which brings us to where we are now: the Pacers being in a luxury tax pickle, partly because of a $14 million max player who somehow managed to not score in FOUR playoff games this year. I don’t mean to pick on Hibbert, but it is what it is. Your highest paid players have to be your best players. They surely can’t completely drop off the radar. One way or another, Stephenson is always on the radar.

For many, the Pacers have drawn the line in the sand with an initial offer that would pay Stephenson $8.8 million per season and help keep the team under the luxury tax threshold. Take it or leave it seems to be a popular feeling people have with this offer. So, let me get this straight: Lance Stephenson isn’t worth more than $8.8 million? Stephenson led the Pacers in rebounds per game, assists per game, field goal percentage, plays defense, can create for himself and others, led the league in triple-doubles and is only 23 years old.

The Pacers’ offer to Stephenson is probably a fair first offer and would be a nice bridge contract to a potentially bigger pay day down the road. But if it takes, say, another million to get the deal done?…I personally don’t think it’s worth losing Stephenson over a little bump up from the initial offer. Perhaps there’s another move that could be made to avoid luxury tax issues. I’m no cap/compliance guru like Pacers VP of Basketball Operations Peter Dinwiddie, but there’s surely a move that could be made.

I’m not saying you pay Stephenson whatever it takes. As with Hibbert, this isn’t a no-brainer decision if the price gets too high, whatever too high is. But the bottom line to me is Stephenson is the second best player on the team and has, along with Paul George, the most upside. $9 million doesn’t hit me as the take it or leave it threshold, especially given the money that’s been spent on this team in recent years. And look around the league: Avery Bradley will get a new $32 million, four year contract with the Celtics. Gordon Hayward is going to get $16 million per season…16 million.

Look, I hear the talk that you can’t over-pay Stephenson because he’s still too immature, inconsistent and a loose cannon at times;  I get it. I hear the rumors that half of the locker room doesn’t want Stephenson back.  I hear all of the bad chemistry talk.  I also saw some of the “good team chemistry” guys not show up too often down the stretch this year. To put the team’s issues down the stretch all on Stephenson is blind. How quickly we forget all of the other rumors surrounding this team the second half of the season.

I still roll the dice with “Born Ready.” It’s a gamble, but I just think the Pacers have to. I don’t see how you replace that kind of young talent and keep pace in the East. And the Pacers have yet to prove they have a system where they can just plug anyone in and maximize their ability, ala San Antonio.

The NBA is about talent and Lance Stephenson is the second most talented player on a team that had the best record in the Eastern Conference. He’s still very young and by all accounts works his tail off. I know this, you don’t typically have to worry about whether Lance Stephenson is going to show up with energy night in and night out.

Stephenson is a real frustration at times, no doubt about it. And maybe he truly is bad for team chemistry. I just know the performances of others on this team down the stretch were bad for my fan chemistry. Smarter basketball people would have a better feel for this than I do. But I don’t see anyone else on that team with the ability to break a guy down or create for someone else like Stephenson can.

I’m most concerned with whether the proper system is in place for players to flourish and score enough to win a championship or whether the current system sucks too much life out of offense to truly contend for a championship. That, to me, is the big question.

Stephenson’s act down the stretch in the playoffs grew tired, no doubt. But I walked away from watching many playoff games disgusted with the play of many others more than Lance Stephenson.

One thought on “The Indiana Pacers Need Lance Stephenson”