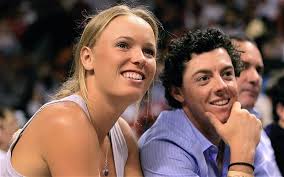 Sure, they were beautiful, rich, and happy, but there is more to life for potential greats than each other.

Rory McIlroy became the seventh golfer in the 154 year history of the Open Championship that is played in Great Britain (when did we decide to stop calling this thing the British Open?) to lead from start to finish, his dad get wealthy from a bet made a decade ago, and he proved my theorem about loved ones as a distraction.

The $341 bet was that McIlroy would win the British Open before he turned 26, and the odds were 500-1.  That netted Pops McIlroy $171,000.  There was a group of friends who made the same bet for lesser cash, and they pushed the take for Team McIlroy to over $300K.

I would never bet on my son.  The parental nerves of watching a son or daughter compete are far too frayed already.  Adding a cash risk to the equation would substantially reduce my joy in witnessing a kid do everything he can to compete.  That would make me crazy – the kind of wild-eyed psycho that we see too often at youth sports events.  Ryan would be repulsed, and likely fold under the pressure caused by the misguided investment and resulting psychopathy.

Maybe McIlroy doesn’t give a damn one way of another what his dad does, but my behavior with $171K on the line would have been horrifying. Glad I know my limits – both financially and emotionally.

One theory I have been resolute in advancing to every young man or woman of promise I can find is that love can wait until after 30.  Focusing on professional advancement, regardless of the field, is key to achievement.   Life is like a 401K in that the earlier the investment, the greater the reward.

Happiness and procreation are important priorities, but they can wait until a career path has been well-established.

McIlroy’s engagement to tennis star Caroline Wozniacki was a focus drainer of the highest order for both.  How many mornings did the couple decide to lay in bed and watch a movie rather than perfect their respective craft?  How many times did their minds wander toward the other when dedicated and conscious work was needed to create the difference needed to beat opponents?

Plenty.  And the resulting mediocrity was entirely predictable.  Each remained good enough to make a nice living, but neither played at a championship level.  The relationship ended and excellence returned.  Not only did McIlroy win The Open Championship yesterday, but Wozniacki won the Istanbul Open (yes, apparently tennis is played in Turkey).

I’m not suggesting that McIlroy prey upon Perkins waitresses like another well known golfer did to indulge his out of whack carnal compulsions, but being engaged is a hell of a lot different than enjoying the company of another as a diversion from professional responsibilities.

Healthy relationships are a wonderful part of life – the portion of life that is reserved for spare time.  The incessant conversations and decision making required to organize a wedding and the subsequent life change are maddening distractions that cannot be indulged if someone is expected to execute a professional plan.

McIlroy minus Wozniacki and Wozniacki minus McIrloy are equally magical mathematic equations that yielded the same result yesterday – victory.