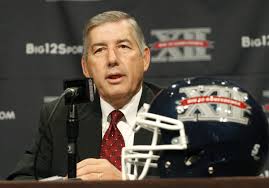 Big 12 Commissioner Bob Bowlsby had a lot to say about the NCAA yesterday. Maybe he should act instead of yammering.

Allowing bureaucrats unfettered access to a microphone is always an adventure, and Big 12 Commissioner Bob Bowlsby took advantage with a rambling diatribe that accused the NCAA enforcement staff of being inert in the battle against cheating.

“Enforcement is broken,” Bowlsby said. “The infractions committee hasn’t had a hearing in almost a year, and I think it’s not an understatement to say cheating pays presently. If you seek to conspire to certainly bend the rules, you can do it successfully and probably not get caught in most occasions.”

Bowlsby’s comments were directed at the NCAA as thought the compliance office in Indianapolis has the capability to effectively police the nefarious elements that ensure recruiting success at many outposts.  Recruits have been paid since the first pigskin was inflated, and without the ability to compel honest testimony, the NCAA has to rely upon the good nature of scofflaws to confess their crimes when all agree many rules are ridiculous and need to be changed.

One area not governed by NCAA rules is compensation for coaches, administrators, and Bowlsby himself who earns $1.8 million per year as the head of a conference whose only purpose is to govern athletic endeavors of unpaid and unrepresented labor.

Most laymen and administrators understand that athletes should be compensated for the wealth their toil creates, and penalizing a school or coach for doing what will be well within the rules in a year or two is a complete waste of time, and would serve no purpose other than to reaffirm the assumed and pervasive hypocrisy in college sports.

Amateurism is wonderful for major universities, (members of the Big Five – the ACC, Big 12, Big Ten, Pac-12, and SEC), not because it is virtuous, but because it provides a mostly cost-free workforce.  The only compensation athletes currently receive is the pass-through expense of tuition and the necessary bounty to keep them alive and able to produce in competition.

The problem with cheating in profitable college athletics has nothing to do with what is right and wrong, but with a rule book that was created by people interested more in maintaining control over massive piles of cash than justice.  Of course, there are those who will bend and contort the rules as their primary point of differentiation in trying to build a champion because their methodology in coaching isn’t strong enough to earn comparative success.

Rules don’t decide value, the market does, and without a rule book that acknowledges that simply axiom of life that has been immutable since man first walked upright, the rules will be meaningless.

Sadly, it’s taking a series of lawsuits to assert that dynamic to what has become a very successful minor league system for both the NFL and NBA.  Stadia and arenas are filled with fans wearing the jersey of their heroes, and the schools get to pocket all the proceeds.  Not a fair deal, but very sweet for the schools and coaches until the NCAA finally runs out of appeals – assuming the judge comes back in favor of Ed O’Bannon and a jury favors Jeffrey Kessler in their separate but important litigation.

Click here to take control of your dental health with Dr. Mike O’Neil at Today’s Dentistry

While college athletics continues to evolve quickly, it makes no sense for the NCAA to preserve and defend an archaic construct that will almost certainly crumble, leaving a shiny new paradigm that destroys the cartel currently suppressing free market compensation for full-time athletes. and reduces the current rule book’s best use to kindling.

If Bowlsby wants to penalize those who bend, break, and mutilate the current NCAA rules, he should feel empowered to start with the members of his own conference.  Nothing prohibits him – or his minions – from visiting campuses, interviewing participants, and issuing penalties.  Instead of carping about the NCAA’s inaction, maybe Bowlsby should do some heavy lifting himself rather than apparently presiding over the slow death of the league that employs him.

One thought on “Despite Bob Bowlsby’s yammering, NCAA is right to avoid enforcing soon to be obsolete rules”