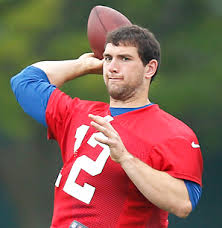 Luck and health are the keys to winning in the NFL, and the Colts have a whole lot of one of those.

After the games to open the season against the Denver Broncos and Philadelphia Eagle, the schedule softens, and the Indianapolis Colts should be able to claim another AFC South crown without anything resembling a challenge.

That presupposes a reasonable level of health – meaning quarterback Andrew Luck remains ambulatory.  He is the linchpin of the Colts success as is the case for most teams and their quarterbacks.  Teams with good quarterbacks go to the playoffs.  Teams with bad quarterbacks (Henne, Weeden, Ponder) draft in the top 10.  And teams with mediocre signal callers (Cutler, Romo, Bradford) tend to overpay as they he ascends into the upper echelon.

The regular season in the NFL is dominated by quarterbacks, and the Colts are very fortunate to be approaching an almost unprecedented run of greatness under center.  There was one season without Peyton Manning where the train came off the rails, but that was well worth it as it brought Andrew Luck to Indianapolis to pick up the baton dropped when Manning had a series of neck surgeries.

Coming off back-to-back 11-5 seasons, the Colts stand poised to take another step toward hoisting a second Vince Lombardi Trophy in less than a decade.

Health will be the key, and not just Luck’s.  There is depth at running back, if necks and knees can withstand the torture of a full season of jarring contact.  Vick Ballard, so promising as a rookie, suffered a torn ligament in his knee in 2013, and Ahmad Bradshaw recovered from foot injuries to play briefly before his season ended in San Francisco due to a neck injury.

If Ballard and Bradshaw are healthy enough to give Trent Richardson some help in the backfield, offensive coordinator Pep Hamilton’s power running game should be well manned.

Luck will have plenty of weapons to keep defenses honest if future hall of famed Reggie Wayne and dynamic tight end Dwayne Allen return to form, and Hakeem Nicks is certainly an upgrade over the brick-handed Darrius Heyward-Bey.  DHB represented a reasonable risk taken by the Colts brass, but feeling good about an Al Davis drafted castoff is done only after reading the fine print.  If football players could be evaluated through a CarFax type service, being drafted by the Raiders would be comparable to discovering a vehicle was recovered from a flood.

The defense is a big question mark.  Who will join LaRon Landry at safety is a big question mark, and how the Colts will manage to mount a pass rush without sack master Robert Mathis for the first four weeks of the season is another area of serious concern.  Throughout his career, Mathis has been able to change a game completely with one of his patented strip sacks.  Without Mathis to enforce a single play stop, the defense is going to have to be consistently solid and fundamentally sound.

Will the additions of free agents (DT) Arthur Jones and (ILB) D’Quell Jackson be enough to stiffen the Colts run defense that was ranked 26th in the NFL in 2013?  Can the Colts again lead the NFL in fewest giveaways?  Those are the biggest non-health related questions that await answers in 2014.

From the first walk-though this morning through the final preseason game against at Cincinnati five weeks from tonight, the focuses will be limiting giveaways, enhancing health, forcing takeaways, and winning the field position battle.

There are no secrets in what makes a football team successful.  The Colts, like the other 31 teams vying for a trip next February to Glendale, Arizona, will try to create opportunities to score while limiting those of its opponents.  Because they play in the woeful AFC South and have a once a generation talent under center, the Colts have a leg up on everyone.

We’ll see whether the rest of the pieces of the equation for a championship run can fall into place beginning today in Anderson.