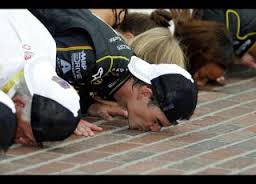 Yesterday’s Brickyard 400 (I’m choosing to remove all sponsorship mentions because I would like to leave some room for content in this 800 word post) was attended by approximately 85,000 (an estimation by Curt Cavin of the Indianapolis Star), roughly one-third of the permanent seating capacity, and that is a failure shared by NASCAR and the Indianapolis Motor Speedway.

It seems impossible that in the two decade history of the event, which once was the hottest ticket in town, there has been such a stark degradation in interest in the biggest race series in America.  People still watch on TV, but the people who are enthusiastic about attending continues to drop each year.

The question of why people have stopped going in droves has been asked of me a dozen times this month, and the answers have changed a bit every time I was asked.  Here are the best reasons for the wide swath of empty sections at the World’s Most Famous Race Course:

In 2008, there were three seemingly unrelated events that caused a collapse in ticket sales –

People had already begun evaluating whether continuing to buy tickets was worthwhile because the races more closely resembled single file parades, but when NASCAR couldn’t get itself together enough to find a tire compound that allowed cars to run more than 11 laps at a time before shredding, the decision to reprioritize expenses to avoid the Brickyard was made simple.

Combine that with the paralytic fear that accompanied a severe economic downturn, and people became very conscious of what they did with the disposable wealth that allowed them to spend $85 to watch a parade of famous drivers turn 160 laps.

Add to that the recent decision of the drivers to avoid promoting the sport locally, and you have the kind of trouble from which businesses cannot extract themselves.

NASCAR continues to operate without the grassroots marketing that initially was so engaging.  Richard Petty, Bobby and Donnie Allison, Cale Yarborough, David Pearson, and Dale Earnhardt took NASCAR from the backwoods to the front page seemed like ordinary guys who loved driving fast.

Today’s NASCAR drivers appear to be too-slick corporate shills rather than skilled maniacs who risked it all for the chance to win.  There are outlier throwbacks like Tony Stewart, who seems to enjoy driving midgets on Tuesdays just as much as Sprint Cup cars on the weekends, but the sad reality is that drivers are indifferent to reaching out to fans through appearances or by making themselves available to the local media.

Click here to get your NASCAR loving, tenderloin chewing teeth fixed by a pro – Dr. Mike O’Neil at Today’s Dentistry

There is yet another challenge – keeping track of the race while at the Indianapolis Motor Speedway without a radio stuck in your ear is damn near impossible.  I watched on TV yesterday after witnessing 14 of the 20 previous Brickyards in person, and without having the pit strategies explained to me by ESPN commentators, I would have been completely lost.

Trying to figure out what the hell is up with 43 different cars by their positions on the cool new scoring tower would have been impossible.  Not knowing what’s going on provides a lack of context – which then prompts indifference.

One of the wonders of racing has always been its simplicity.  The car in front at the end of a specific number of miles wins the race.  Easy!  But not halfway through a race when the #24 car is 18th because he pitted out of sequence while I was in the can.  On TV, it’s explained.  In person, it’s “Hey, what the hell happened to Gordon?”

The result is attendance that roughly equals one-third of capacity at a venue that used to ready itself for a full house.

NASCAR’s challenge in Indianapolis is even more daunting than when it launched the Brickyard 400 because selling fans a second time is much more difficult than engaging them the first.  People likely to buy have already made the decision to spend elsewhere, and getting them to change their minds is tough – really tough.

Refusing to renew requires buyers to admit they made an error in judgment when they made the initial decision to purchase tickets.  To get that group of fans to return calls for them to admit that they made a second mistake, and that is nearly impossible.

So the Brickyard will likely continue to see attendance wilt, and that is bad news for everyone involved.  The question is not whether the fans will return, but where bottom lies.

2 thoughts on “Indianapolis Motor Speedway – Brickyard 400 is a withering event, and for good reason”