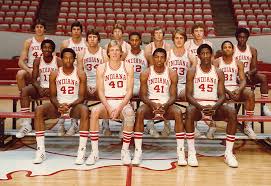 Lots of Indiana and Illinois kids won a National Championship for Indiana University in 1981.

Before I even begin writing, I want you to be aware that everything I embrace in this post represents pie in the sky ideals from a time long past that cannot return.  Tom Crean might as well submit a letter of resignation as adopt any of these philosophies.  I know they are unworkable, and I’m not holding anyone accountable for not employing them in 2014.

There was once a time when Indiana Basketball followed rules far more rigid than those employed by the NCAA to ensure fairness, and that kids from Indiana filled the Indiana University roster.

If Indiana needed to reach beyond its borders for talent, it almost never crossed more than one.  Illinois and Ohio were fair game, but beyond that kids were ignored.  Jim Thomas came from Florida, but his parents graduated from Indiana so there was a legacy issue there.  Todd Meier was from Wisconsin, but to us that’s like far northern Illinois.

Indiana graduated virtually everyone, and no advertising was allowed in Assembly Hall.  Hoosier fans could look down there noses at every fan of another school with haughtiness because all of the excuses used for programs that regularly cheated or used basketball players as cattle in a cash grab were shown to be hollow concessions by the lazy and stupid.

And Indiana won – a lot.  Eleven Big Ten titles in 21 seasons, and three National Championships.  Those were high times for the Hoosiers.  It was akin to winning AAU tournaments with a neighborhood team of talented honor students while playing against those who culled talent from everywhere and anywhere.

There was a piece today in the Indianapolis Star about the Indiana University footprint, and how necessary it is for them to establish a recruiting foothold in the east – how financial concerns prompt Indiana to accept cash for playing at Madison Square Garden and the Barclays Center at the expense of scheduling home and homes or going into there pocket for opponents to visit Assembly Hall without a return.

The days of playing a robust home schedule that makes studies for players easier and life for non-playing students more fun are over.  The thought of never having to leave a 90-mile radius of Bloomington to fill the roster with guards appear to be gone too.  Players still succeed academically, and with the exception of a grim period between 2001-2008, rules have been followed – minus a visit to Gary Harris at Hamilton Southeastern High School one day outside the allowed window and a Steve Alford appearance in an Alpha Gamma Delta sorority calendar for charity.

Indiana wants to get acquire talent from the four corners of the globe, and squeeze money out of every square inch of Assembly Hall just like the big boys.  Can’t blame Crean for trying to find the best players available, and I was happy as hell with Victor Oladipo as Hoosier – both on and off the court – so I’m wooed too by good players who can’t get to Assembly Hall by car in under two hours too, but I sure did love it when championship basketball was played in Bloomington by kids who always dreamed of wearing the candy stripes.

Click here if you cover your teeth when you smile. Dr. Mike O’Neil can fix them up at Today’s Dentistry

College basketball is big business, and at Indiana it is THE siren song for prospective college students looking at more than the quality of the business school as they decide where to enjoy their lives for the next four to seven years.

It’s also the single most important factor in determining the largesse of alums and boosters as they decide how many zeroes to throw on the checks that pay for new buildings in Bloomington.  You think athletic director Fred Glass cares if Crean wins with Martians?  Exercising some loony arrogant impulse to win with players from a tight radius of Bloomington is employed at the risk of Crean’s $3.16 million paycheck.

But it sure was fun – and successful – a generation ago.