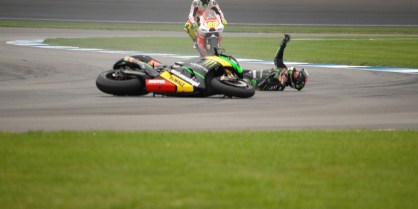 After the Red Bull Indianapolis Grand Prix this past Sunday, I waited outside the Monster Yamaha Tech 3 team garage for rider Bradley Smith, who had just finished sixth. As Smith hopped onto his scooter, he looked at me and held his bloody, disgusting looking finger up high so I could see it and said, “I can’t talk just yet. I need to get this taken care of.” Fair enough.

Smith was able to start Sunday’s race despite re-injuring his finger near the end of qualifying Saturday. The British rider high-sided from his bike while going through the fast and swooping Turn 1 and came to a sliding stop. 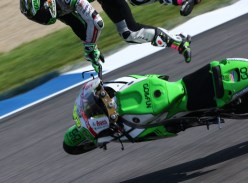 Alvaro Bautisa get launched from his bike.

Spain’s Alvaro Bautista also was involved in a scary acrobatic display as he crashed in Saturday’s practice session. He was launched high in the air and landed safely, thanks only to a combination of luck and the experience of knowing how to land as best as possible whenever possible.

“Luckily I’m feeling OK now, but this morning’s crash was really scary,” Bautista said after the accident. “I think I (was) flying for several seconds.”

Having covered every Red Bull Indianapolis GP and watched countless other Grand Prix, you will have a hard time convincing me that motorcycle racers aren’t the true gladiators of sport. There are certainly arguments to be made about the toughness of many other sports and athletes. But no one is more gladiator-esque than a MotoGP rider.

When I did catch up to Smith a little later, he talked about his nagging injury, the product of the rigors of motorcycle racing.

“Basically, I’ve taken the skin off again not quite down to the bone, which is good because exposed bone is never great,” Smith said. “I’m glad I still have something left. Luckily I don’t have too many pain receptors anymore in that finger, so it didn’t hurt that bad.  Unfortunately, with the way that the schedule goes the next couple of weeks, I’m probably not going to be able to get it healed for a good four or five weeks. I’ll keep re-opening it every time I ride.

“But it’s a normal situation for motorcycle racers.”

No, this injury certainly doesn’t compare to the broken collarbones and wrists and other stuff that are more vivid reminders of what these guys go through. But the crash photos, videos and the lasting impact of the crashes themselves are evidence of just how much on the edge MotoGP riders are and how much they expose themselves to the consequences of what they do.

A common refrain I hear from people new to watching MotoGP racing is, “Those guys are nuts.”  But as Nicky Hayden, “The Kentucky Kid” and 2006 MotoGP World Champion who sat out this year’s race due to a broken wrist, once said, “It’s not all balls.  You gotta have brains, too.”