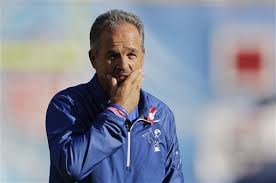 Indianapolis Colts coach Chuck Pagano is able to be a nice guy because people know they can’t push him around.

There is one sure way to stop bullying, and that is to refuse to be bullied.  That was the message yesterday from Indianapolis Colts coach Chuck Pagano as he was asked a series of questions by the media that were unrelated to football, but very relevant to the lives of some young fans.

Do you have any response to Reggie Wayne saying he’d make you tap out in the boxing ring?

“Make me tap out? Good luck. Good luck. He’s a football player. He isn’t a WWE wrestler. He’s watching too much TV.”

So you would hold your own against Reggie Wayne?

Is that a challenge?

“No, I’m just saying it like it is. I may not win it but we’re going down swinging. Dad always said growing up if you’re getting picked on by bullies, who do you go after? You go after the biggest, baddest one and you hit him right here on the button. You smash that nose and you get that nose bleeding and those eyes watering and he goes down, guess what happens to the rest of the gang? They’re gone, I got myself out of that pickle. Sometimes that may work, sometimes it may not, but that’s how you’ve got to start.”

There are rules that might keep some kids from fighting back, and for others there are physical limitations that need to be considered, but all things being equal, Pagano is right.  The best way to stop a bully is to invoke the physical consequence Pagano described for his actions.

Bullies are weak-minded and insecure by nature, and they seek out people they believe are weaker yet to assert dominance.  Show you cannot be dominated and the bully either learns not to pick on kids or they learn not to pick on you.

Many kids who move to a new school get picked on, and until the new kid shows he isn’t playing, the unpleasantness continues.

I had this happen as a seventh grader.  In study hall, a group of kids started thwacking me on the noggin with their pencils, messed with my books, and generally made me feel miserable.  At that point, the persistent messages from teachers and school officials about fighting had taken root, and I left school rather than fight.

I walked to my grandmother’s house, and she very nicely suggested that I call my Dad and tell him what happened.  Dad drove over, picked me up, and took me back to school.  During the drive, he told me that the next time any of those kids touched me or messed with my property, I was to hit him.  I mentioned the likelihood of punishment, and Dad said I wouldn’t have to worry about that.

As we walked into the school, Dad saw the principal and teacher who was running the study hall when I left, and he told them, “Listen, I have told Kent the next time a kid picks on him that he should punch that kid.  If he doesn’t do that, he’s going to answer to me.  He has expressed a concern that when he hits the kid, he will be in trouble from you.  As a parent, my punishment will trump yours, so he will obey me.  If you want to punish someone for Kent hitting a kid who picks on him, that would be ridiculous, but if you need someone to punish, come after me.”

The principal and teacher looked baffled and didn’t respond.  Dad walked out of the school, and I went to class.

Two weeks later, one of those same kids took the pen I was using to do some homework, and stood at the front of the classroom taunting me.  I thought, well, this is it.  I walked to the front of the room, and the kid held the pen inches from my face and told me I wouldn’t be able to take it from him.  I did exactly what Pagano advised yesterday.  I made a fist and threw it as hard as I could at the kid.  It hit him in the nose, and he was stunned for about two seconds.  Then, his face contorted with rage, and he lunged for me.  The teacher got between us, and we were both sent to the principal’s office.

Both of us were lectured to briefly and sent back to class.  That was the last time I was taunted or bullied.  A little unpredictability goes a long way with bullies.  A shot to the nose might result in a beating, but backing down simply cannot be an option if the goal is to stop addlepated oafs who require picking on a smaller kid to feel manly.

Click here to get your teeth examined and fixed by the best – Dr. Mike O’Neil at Today’s Dentistry

Today’s kids are a little different as incidents involving guns in schools have shown.  Twenty-five years ago, we handled problems with our fists, not guns.  The stakes are a little different today, but the message is the same.  Refusing to accept bullying can take a lot of forms – I just happen to believe that Pagano’s solution is the right one because it worked for me.