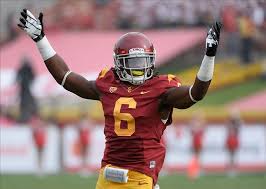 As  the college football season kicks off, I could spend some time pointing out the most entertaining and intriguing Week 1 match-ups to get the season rolling: Texas A&M-South Carolina on the newly-formed SEC network (which was actually a dud last night), Wisconsin-LSU, Clemson-Georgia, Ball State-Colgate (I’m kidding), IU-Indiana State (I’m kidding, again). But none of them is more entertaining or intriguing than USC-Josh Shaw.

Early this week, we learned of Shaw’s story of heroism, supposedly jumping off a second floor balcony to rescue his drowning nephew. No sooner did I hear things like, “Finally, a good story coming out of the sports world,” we learned not only was Shaw not the hero he portrayed himself to be, he was named in an LAPD disturbance report, the product of an investigation of an occurrence at an apartment complex.Who knows what, if anything, will come of the investigation or what transpired. Whatever happened, Shaw has two ankle sprains and is out indefinitely due to the injuries and suspension by coach Steve Sarkisian.

“We are extremely disappointed in Josh,” Sarkisian said. “He let us all down. As I have said, nothing in his background led us to doubt him when he told us of his injuries, nor did anything after our initial vetting of his story”

Now, I’m not going to pretend I knew something was amiss. But upon hearing the story, something immediately made me pause and at least have a little bit of doubt. I thought, “Wow, that’s some story.” Something didn’t quite seem right.

How could I have a smidgen of doubt but USC didn’t? No one – anyone at USC or one media member – bothered to fact-check this? I heard one sports personality blast another for suggesting the same. Their point was, Shaw was a high character guy. Why shouldn’t USC believe him?

It’s not like Shaw said he was late for practice because he had to stop and help a little old lady cross the street. USC’s team captain just sprained two ankles by supposedly jumping off a second floor balcony to rescue his drowning nephew! That’s very brave, Josh. You’re a true leader. Thanks for the explanation. It happens to all of us. Moving on…

Good public relations people gather all facts. They are trained to be detail-oriented and ultimate fact-checkers in order to stay ahead of the media, control the story, or answer any an every question from all angles. We all have people we trust so much that we have no reason to doubt them. But this is a national media story you’re releasing. Come on… The bottom line is both sides of the media fence – USC public relations/sports information and the press were lazy here. It happens;  heck, it’s par for the course in this day and age. But don’t make excuses for them and don’t blast people for suggesting laziness prevailed. What’s a professional PR person supposed to retort with here: Hey, I’m just the messenger?

To top it off, Shaw added this little nugget to his story of bravery: “I would do it again for whatever kid it was. It did not have to be my nephew.” It wasn’t enough to lie to everyone. He had to lay it on thick and go all super hero on us.

Upon learning of Shaw’s lie, Sarkisian added: “I appreciate that Josh has now admitted that he lied and has apologized. Although this type of behavior is out of character for Josh, it is unacceptable. Honesty and integrity must be at the center of our program. I believe Josh will learn from this. I hope that he will not be defined by this incident, and that the Trojan Family will accept his apology and support him.”

So, I suppose all would be forgotten if this was a lie to cover-up, oh…playing pickup basketball or skate boarding or whatever. But we don’t know, yet, what happened and why he lied. The investigation is ongoing. Whatever the case, it’s been an entertaining kick-off to the college football season.

So what’s next for our scarlet and gold trojan hero? Tune in next week for the exciting conclusion of the investigation.