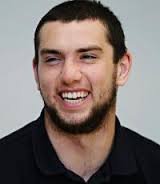 Andrew Luck and Colts fans will be smiling in January, unless he gets hurt. 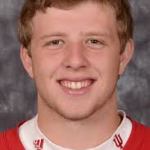 Nate Sudfeld will be smiling too, unless…well, you know.

There is no season quite as silly as the period between the opening of football training camps and the regular season opener.  We try to read tea leaves to figure out what the hell might happen, and no one is wrong because the measure for success is 100% subjective.

Now, we get down to the real thing in the NFL and college football – the games that matter, where successes and failures are recorded in permanent ink and result in magnificent rewards for the winners and dire consequences for the losers.

Some walk the walk and others can only talk the talk.  I’m reminded of Chicago Cubs owner Tom Ricketts declaring during Spring Training less than six months ago that the Cubs looked like a playoff team.  That is grotesque evidence of talking the kind of talk that is emitted and processed only by the insane.  Optimism runs rampant everywhere because why the hell not?

People in Bloomington who are mostly rational are declaring the Hoosiers fixed, competitive, and ready to win nine games.  That a winning conference record was last earned at Indiana 21 years ago has been lost on these folks.  Indiana might be ready to roll, but battling generations of malaise requires more than talking about winning.

So the Hoosiers were able to manhandle Indiana State 28-10 Saturday by running the ball at will, and stopping the Sycamores more often than not.  The play calls were so mind numbingly dull that an Indiana State fan sitting ten rows behind us spent virtually the entire second half yelling. “It’s a draw! Another draw is coming! Get ready for the draw!”  He seemed to be right almost every time he opened his mouth.

I’m sure the voices in the heads of the Indiana State coaching staff were yelling the same thing.  The runs kept coming, and the result was 455 rushing yards, including 247 from explosive junior Tevin Coleman.  Does that portend another 11 positive Saturdays, or did the Hoosiers take advantage of a weak opponent?  We’ll find out soon enough.  Despite an opening clunker against Western Kentucky, Bowling Green is expected to be pretty good.  Then a trip to Mizzou looms for Indiana.

Optimism reigns on campus for yet another week, and that is all fans habituated to mediocrity – at best – ask for.

The Colts are a different story.  Very good regular seasons are almost always expected and delivered because the Colts have had once per generation quarterbacks for 16 the last 17 years.  The torch being passed from Peyton Manning to Andrew Luck is not the sort of good fortune that often befalls NFL teams.  Only Brett Favre to Aaron Rodger rivals Manning to Luck as an orderly and excellent line of succession.

The Colts have excellent players at other spots, but they are getting old.  Robert Mathis, 33, is the all-time franchise sack leader who will sit through the first four weeks because of a suspension for using Clomid as a fertility aid.  Reggie Wayne is 35 as he returns from a torn ACL.  Forty-one year old kicker Adam Vinatieri has shown no sign of aging.  Pat McAfee is a relative pup as one of the best punters in the NFL at age 27.  Receiver T.Y. Hilton is only 24 as he enters a prime that may allow him to one day rival Marvin Harrison and Wayne as the best in team history.

Click here to invest your time wisely by seeing the best dentist in Indiana – Dr. Mike O’Neil at Today’s Dentistry

Other than those players, the Colts are good, not great, and it’s hard to win championships without a bunch of great players.

Has general manager Ryan Grigson cobbled together a group that can hoist a Lombardi Trophy?  There aren’t a lot self-proclaimed experts clamoring for seats on that particular bandwagon.  Time will tell.  The first report card comes Sunday night in Denver, and then the second will be issued at Lucas Oil Stadium the following Monday.  By December, the speculation will have been replaced by knowledge.

That will be true for the Hoosiers too.

The fun of sports is in guessing what will happen, and some feel so strongly about their ability to predict the future, they invest cold cash on it.  As for me, the pride of being right is enough.  No sense throwing money at the unknown.

My guess is that the Colts finish the 2014 season 12-4, and the Hoosiers go 7-5 before playing in their second bowl since 2007.  The Colts will advance to the AFC Championship, but fall just short of a third trip to the Super Bowl in less than a decade.

The guess work is now over, and all that’s left is for the Colts and Hoosiers to prove their value with performance, not words.