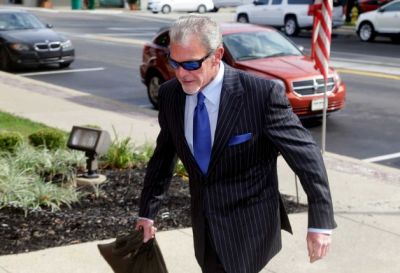 Colts owner Jim Irsay walks into the Hamilton County Cpurthouse yesterday – the building where justice should be meted out.

The number of people being warehoused in American prisons and jails continues to skyrocket because American justice is more about assessing punishment than causing behavioral change.  Similarly, the NFL’s system of discipline is designed to impress fans with its severity, rather than enlighten and enrich.

So Colts owner Jim Irsay was suspended yesterday for six weeks, fined $500K (an insignificant amount of cash to Irsay, but quite a stack to season ticket buyers), and banned from NFL/Colts related social media commentary.

What exactly is Irsay guilty of?  He failed to signal during a lane change and was discovered by Carmel Police to be affected by Oxycodone and hydrocodone use.  Yes, Irsay is addicted to painkillers.  He committed a crime, has been punished by the State of Indiana, and is in treatment as he tries to deal with the disease of addiction.

Being banned from the Colts facility, games, social media, and writing a check helps fans see that the NFL is just as serious and irrational in penalizing owners as it is with players.  The logic is flawlessly corporate – “See, if we are idiots with one subgroup, we must be idiots with all!”

Good for NFL commissioner Roger Goodell, who continues to protect the shield with the same grace Torquemada used to preserve Catholicism during the Spanish Inquisition.  Violators are banished.  To hell with medicine.  Players getting stoned, even in states where marijuana use has been legalized, is grounds for dismissal.

That pot use provides no competitive advantage is meaningless.  LaVon Brazill and Josh Gordon are goners for at least a year, and if during that NFL mandated year off, they pass time by using, the penalties will mount.

Addiction being a disease is of no consequence in the conference rooms of the NFL.  Wrong is wrong, and severe punishment must be meted out because God forbid anyone watching professional football sees the NFL as compassionate or reasonable.

Denver Broncos wide receiver Wes Welker will sit the first four games of the season because he tested positive for amphetamines sometime around Kentucky Derby weekend, according to news reports.  How taking speed in May – a charge Welker denies – helped the Broncos gain a competitive advantage is a question even the Great and Powerful Rog will have difficulty answering.

Taking PEDs is clearly an issue in professional sports.  The money at stake for performing at a high level requires a serious disincentive as a countermeasure, but pushing players to the curb, and in some cases off a cliff, for non-PED drug use is unfair and ignorant of the insidiousness of addiction.

Does the NFL believe that suspending Irsay for six games and issuing a meaningless fine is going to enforce a more serious penalty than the ravages the addiction has levied upon his life?  Does it see the laws governing recreational drug use or police abilities to enforce them as inadequate?

That the penalties for drug use have been collectively bargained does nothing to absolve the NFL and Goodell of its culpability in perpetuating the ignorance with which fans view addiction and marijuana use.

Click here for the gift of great teeth – Dr. Mike O’Neil of Today’s Dentistry is THE BEST!

Irsay is the victim of a disease, and recovery will not come more quickly because of Goodell’s grandstanding.  Granted, as the son of an addict, Irsay should have avoided intoxicants.  He should have anticipated the likelihood of slipping down the same slope that rendered his dad a laughing stock among NFL owners and fans when he first decided to use.

Minus an ability to un-ring this bell, Irsay will need to wage his battle one day at a time for the rest of his life.

His comment released yesterday following the conviction and suspension shows an understanding and resolve that has nothing to do with the NFL’s penalties, “I acknowledge the mistake I made last March and stand responsible for the consequences of that mistake, for which I sincerely apologize to our community and to Colts fans everywhere. Even more importantly, though, I am committed to do everything in my power to turn this whole experience into a positive event for myself, my family, and the community. In retrospect, I now know that the incident opened my eyes to issues in my life that needed addressing and helped put me on the path to regain my health. I truly hope and pray that my episode will help in some small measure to diminish the stigma surrounding our country’s terrible and deadly problem of addiction. It is a disease like other progressive, terminal diseases—one that can only be successfully treated by understanding, committed hard work, and spiritual growth. I am deeply grateful for the tremendous outpouring of love and support during these past few months from my family, friends, care-givers, and our great community. Please know I am firmly committed to staying on my path to good health and I look forward to a great season.”

Say a prayer for a good guy fighting a vicious demon, and another for a commissioner whose relentless and harsh consequences for non-PED drug use causes more problems than it solves.