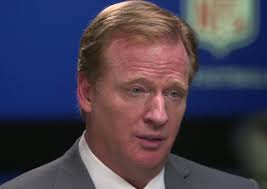 Roger Goodell was predictably sanctimonious and saccharine while quizzed by Norah O’Donnell of CBS News.

When people are comfortable telling only part of the truth, trouble ensues.  NFL commissioner Roger Goodell went seriously old school politician yesterday during an interview with CBS News Norah O’Donnell, who did a more than credible job in asking the right questions.

Goodell tried to appear earnest while dodging, dipping, and ducking.  He admitted his office erred, but steered safely away from specifics that could cost him his job.

It again reaffirmed the very problem with Goodell’s handling of the entire Ray Rice affair.  This whole “the truth is what we say it is” dynamic has been successful for presidents, CEOs, and the commissioners for generations, and the only surprise is when there is a meaningful penalty for wrongdoing is assessed against people in power who pulled back the curtain because of a still operational conscience.

Nixon was never repentant about Watergate – just disappointed that he got caught.  Had he burned the tapes detailing the cover-up, he would be known as the president who went to China and ended the Vietnam War.  The message taken by those in power from Nixon’s travails is to burn the tapes rather than do the right thing to begin with.  Viewing Goodell through that prism allows for all of this to make a certain amount of unfortunate sense.

Sadly, decency and justice is at the bottom of the ladder of priorities for the powerful and wealthy.  Retaining position is at the top.  Expedience is always the goal.  Find the public’s sweet spot for forgiveness, exploit it, and move on.

A great example is the ovation Rice received in Baltimore during the preseason.  What?  A standing ovation for a guy who knocked his soon-to-be wife unconscious in an elevator?  That applause wasn’t so much an expression of love for Rice but a collective indictment of the repellent and self-important authority figures in our society.

Here is a transcript of the Goodell interview with parenthetical commentary for me:

O’Donnell: When did you first learn about this second tape?

Goodell: Yesterday morning. I got into the office and our staff had come in and said, “There’s new evidence, there’s a video that you need to see.” And we watched it then.

O’Donnell: Did you know that a second tape existed?

Goodell: Well, we had not seen any videotape of what occurred in the elevator. We assumed that there was a video. We asked for video. But we were never granted that opportunity.

[What Goodell doesn’t admit to is seeking access to that particular videotape.  They asked “for video,” not “that video.”  There is a difference, and it’s the kind of difference that is designed to provide cover down the road if this story keeps rolling far enough that his words are revisited by legal archaeologists.  Goodell also says that “we were never granted that opportunity.”  That language specifically defrays responsibility for them not getting the video to a third party.]

O’Donnell: So did anyone in the NFL see this second videotape before Monday?

[When a one word answer suffices, there is no point in offering two.  Quick answers stump inexperienced interviewers, and they will sometimes move on without challenge.  Good for O’Donnell for pushing through for a more complete response.]

O’Donnell: No one in the NFL?

Goodell: No one in the NFL to my knowledge, and I asked that same question. The answer to that is “no.”

[“To my knowledge” is the equivalent to the phrase made famous during the Watergate hearings – “to the best of my recollection” – to provide coverage should conflicting answers be given down the road.  In court or a congressional hearing, witnesses try to dodge perjury charges.  Here, Goodell just doesn’t want to be revealed as a bald-faced liar.]

O’Donnell: How is it that the NFL didn’t get their hands on the second tape but a website called TMZ could?

Goodell: Well, I don’t know how TMZ or any other website gets their information. We are particularly reliant on law enforcement. That’s the most reliable. It’s the most credible. And we don’t seek to get that information from sources that are not credible.

[This is Goodell’s worst constructed response of the interview.  He claims not to seek information from sources that are not credible, but the source of the second video is credible – the casino itself.  To avoid pursuing information like that contained in the damning video from the source of the video, and claim investigatory high ground is ridiculous.  O’Donnell should have challenged this.

O’Donnell: The question becomes did the NFL drop the ball? Or was the NFL willfully ignorant about what was on this tape?

Goodell: Well, we certainly didn’t know what was on the tape. But we have been very open and honest. And I have also — from two weeks ago when I acknowledged it, we didn’t get this right. That’s my responsibility. And I’m accountable for that.

[This is O’Donnell’s best question, and it is correctly placed immediately after an intellectually lazy answer.  Goodell rallies with self-righteous blather and a pseudo admission of accountability, but never answers the question.  O’Donnell should have seized the moment with a follow up about specifics in how Goodell did not get this right and in what ways he should be held accountable.]

O’Donnell: But what changed? I mean, on the first tape she was lying unconscious on the ground, being dragged out. Did you really need to see a videotape of Ray Rice punching her in the face to make this decision?

Goodell: No. We certainly didn’t and that — and I will tell you that what we saw on the first videotape was troubling to us in and of itself. But what we saw yesterday was extremely clear, it was extremely graphic and it was sickening. And that’s why we took the action yesterday.

[Another successful dodge from Goodell – expressing outrage and asserting that the action taken Monday was the correct and just reaction to the release of the second video.  The truth is that the NFL didn’t need to see anything, but completely underestimated the public’s disdain for a running back knocking a woman unconscious in an elevator.  The only difference between today and July 25th when Rice was suspended for two games is the public outrage that continues to demand satisfaction.  The NFL rolled the dice that the tape would never see the light of day, but didn’t anticipate the closing of the casino, which left the video as a monetizable asset for a displaced employee.]

O’Donnell: What does that mean that he was suspended indefinitely? Does that mean Ray Rice will never play in the NFL again?

Goodell: I don’t rule that out. But he would have to make sure that we are fully confident that he is addressing this issue clearly, (that) he has paid the price for the actions that he’s already taken.

[Silly question and a layup of a response for Goodell.  O’Donnell was never likely to rattle Goodell or get him off his game, but this was a silly question that placated Goodell and gave him a chance to regroup.]

There is a reason that a commissioner like Goodell is named to that position, and the relentless counsel and rehearsals that undoubtedly took place prior to the interview paid off, but the result is not going to satisfy a public’s hunger for justice.  Goodell appears slick and evasive, leaving viewers to infer nefariousness and/or incompetence.

Simply admitting a sloppy investigation is not enough.  Those bones need meat, and the specifics of what drove the decision to not pursue the videotape from inside the elevator is what is needed to tie a bow around this thing and get people to move on to the supposed racism of Atlanta Hawks owner Bruce Levenson and general manager Danny Ferry.

It won’t be forthcoming because if the information weren’t damning enough to tarnish the shield and cause irreparable damage to Goodell’s position, it would already have been offered.

At the Goodell level, justice is only served when it’s expedient or profitable.

I’m sure he sleeps just fine – to his eternal discredit.