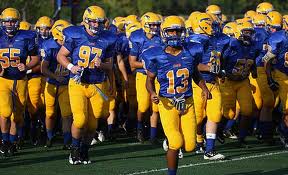 Carmel’s football team acted like a team during adversity, and win or lose they have won wisdom as a result.

Friday nights across America in the fall means high school football, and my wife and I took in the Homecoming game at Carmel High School against Pike.  We love high school sports, but need a context to make the competition meaningful.  I got all the context I needed the previous Tuesday.

That was the day I met Shakir Paschall, Stephen Watts, and Jesse Clifford – three Carmel players who have lost their fathers over the past two years.  These three young men aren’t just teammates, but brothers in loss.  Each has helped the other two mourn, learn, and overcome.

I interviewed all three, along with their coach Kevin Wright, and the results aired on CBS Sports 1430 throughout last week’s shows.

Shakir, Stephen, and Jesse were already sitting in the Carmel football office waiting for me when Kevin ushered me in and made our introductions.  I had never met these young men before, and knowing what I was there to talk to them about, I was more than a little nervous.

I asked Shakir to tell his story, and for eight minutes he opened up to share his premonition of his father’s passing the morning of the semi-state game against Penn where he did indeed die of a heart attack.  Shakir spoke of the last words the two shared, the last touch prior to the game, and the feeling of dread when he looked into the stands during the fourth quarter after his dad was stricken.  He quietly recalled all of it, and as has been the case since that night, he was supported by his teammates.

Stephen and Jesse followed with their memories of the moment their dads passed, and the outpouring of love and guidance from friends, teammates, and coaches that helped them understand that from terrible can come wonderful.  The three teammates have become friends, brothers really.

As Jesse told of his dad’s battle with ALS, and the final moments of his life, his hands were tightly clasped.  Stephen reached across the table and sweetly patted Jesse’s hands in the way only family is comfortable.  It was the kind of lovely gesture most teens are reluctant to share, but was exceptionally natural for Stephen and Jesse.

Again and again, Shakir, Stephen, and Jesse talked about the need to be men and not show their emotions at any point during the process of dealing with their father’s passing, and I kept thinking they were way too young to carry that burden, that 18-year-olds should be concerned with the frivolous – not the consideration of how their behaviors might affect others so deep in their mourning.

When the three young men finished, they rose to leave, and I shook all their hands.  My impulse was to indulge my empathy and compassion f and hug each, but my role wasn’t to be a friend.  I was just a conduit trusted to share stories with listeners who might find strength and value in hearing them.  My job was to ask questions, record the answers, and leave Shakir, Stephen, and Jesse to comfort each other and play football.

The game was dominated by top-ranked Carmel as it beat #6 Pike 48-21 in front of a crowd that would have made a MAC school proud.  Regardless of the score, Carmel’s players are winners because through the travails of Shakir, Stephen, and Jess, they have learned about the gift of giving and receiving friendship during a challenging time.

Click here to trust only the best dentist in Indiana to examine and fix your teeth – Dr. Mike O’Neil of Today’s Dentistry

If you didn’t have the chance to hear these three fine young men share themselves on CBS Sports 1430, take a few minutes to click on the links below to listen to what wisdom gathered too young and painfully sounds like: