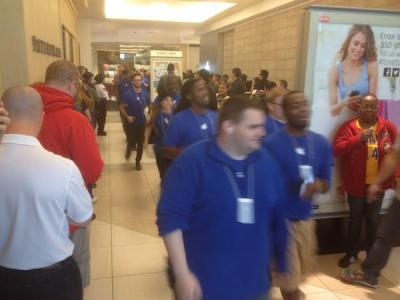 Apple employees arrive at the Fashion Mall this morning just before 8a. They cheered and shrieked at weary line standers before telling us the iPhone 6+ units were gone.

Always trying to be the clever guy who doesn’t have the wait in line, I ran over to the AT&T Store this morning to pick up a new iPhone 6.  Why not the Apple Store at the Fashion Mall?  Because I thought the rabble would head there, and who would think to take the road less traveled to the AT&T Store.

I felt pretty damn smart when I saw a half dozen people outside the AT&T Store at 7:00 a.m., when I knew there would be many more at the Apple Store.

The check-in guy said immediately upon my arrival, “We have committed all of our six-plus phones.”  The iPhone 6 Plus has a larger screen by a full inch over the smaller model, and I thought that would make my life better somehow, so I hopped back in the car for the quick drive to the Apple Store.

Surely, they would have enough of the Plusses to accommodate everyone with the same idiotic compulsion to use a brand new phone that does almost exactly the same stuff as the previous model – just a little faster.  After waiting in a line of at least 1,200 for an hour that only moved because of attrition, an Apple guy yelled, “Six Plusses are gone.”

I had the choice of driving back to the AT&T Store to waiting behind six people, or stay put toward the rear of 1,200.  Adios Fashion Mall.

Why Apple decided it was good business to turn people away disenchanted is anyone’s guess.  Usually they are smarter than that.  I doubt many of those who bolted from the Fashion Mall store were as diligent as I was in seeking satisfaction elsewhere.  They might have decided that their attraction to Apple products was as silly as I know mine to be.

But I was undaunted in returning to the AT&T Store happy with my new and pseudo-mature decision to buy the smaller iPhone because this one will fit easily in my pocket.  The Six Plus is phablet – half phone and half tablet.  What I once coveted I now rejected because I am just that willing to talk myself into convenience.

My feeling of intellectual superiority among the iPhone devotees grew as I found that almost no movement had been made in the line at the AT&T Store.  This should have been troubling, but I am easily self-duped.  I had no idea how long it would take the line of six to move, but I had to be a hell of a lot faster to the front than at the Apple Store.

My calculation was that for every 200 people served by Apple, only one needed to move at AT&T.  That might have been the only piece of sound logic I used all day.  And the line did move at a reasonably quick pace.

I stood with a guy named Andrew who was wearing an Indianapolis Indians hat.  He graduated from Lawrence North High School in 2008 and played college baseball (who says I can’t talk to strangers?).  We talked baseball for the hour we stood in the brisk morning air, and then our names were called.

I asked for a gold unit (it made me laugh to say it) with 64G of memory.  I doubt I use 25% of it, and frankly don’t know what I would do with it, but it’s four times more memory than my old iPhone 4, of which I only used 25%, so again I felt pretty damn bright despite knowing that I will never have any use for enough memory to hold thousands of songs, videos, and photos.

Todd helped me with my purchase, and was nice enough not to scoff visibly when I told him I had not backed up anything on my old iPhone.  He was cheerful and good-natured – just the kind of guy AT&T Stores need on a day when the morons come out to play.

And now, less than five hours of embarking upon this journey toward technological excellence, I am the proud owner of a machine very similar to the machine I used to own, and I feel very smart for having done that.

That appears to be the key to Apple’s success – making idiots feel smart for making a poor business decision.  I’m not sure Apple understands technology, but I’m damn certain they understand Americans.