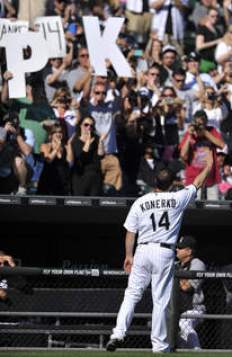 You wouldn’t do it. Many in the media wouldn’t do it: recognize Paul Konerko throughout his career as one of the best players in the game. Why would you take time to recognize him now?

Everyone’s focus has been on Derek Jeter. Now there seems to be the feeling, “Oh, yeah, we can’t forget Paul Konerko.”

Another great in the game called it quits Sunday, hanging it up after a glorious 16 year career on the South Side of Chicago. Paul “Paulie” Konerko did it the right way all along the way. The career .280 hitter was, year-in and year-out, one of the best hitters in the game and also under-appreciated defensively. Yet, every year you’d barely know the guy was in the upper tier of MLB players, often putting up better numbers than more recognized players.

A friend of mine – a Cubs fan mind you – has said for the last few years that Paul Konerko was hands-down the most underrated player in baseball the past decade. He was never talked about when people discussed the best in the game. He just produced with the best in the game. And what’s really impressive was, other than when injuries got in the way here and there, Konerko produced consistently over the long haul.

As Jason Stark of ESPN so appropriately pointed out in a column Monday, “Other than in Chicago, Paul Konerko hasn’t gotten the kind of send-off he deserves — not this season and certainly not this month. Too bad. He’s been the kind of player, and human being, that any franchise would be happy to have on the payroll for a decade and a half.”

Konerko won a World Series in Chicago – the unthinkable – and delivered a memorable grand slam in that 2005 World Series against Houston. He also won the ALCS MVP Award that year in the series against Angles. He was so often one of the best hitters for average and power in the game, yet people seemed surprised every time he put up the numbers. It’s as if every year people were being re-introduced to Paul Konerko.

And it’s not as if Konerko played in obscurity in a small market. He played in Chicago! How he wasn’t more distinguishably recognized during his career is beyond me. And the White Sox, for the most part during his career, were a factor and not a cellar dweller. 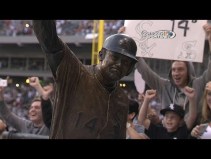 As Stark also so appropriately pointed out, Konerko is just one of just 10 players in history, whose primary position was first base, to make it into 400 homers (439)/400 doubles club (410)). The others are Jimmie Foxx, Lou Gehrig, Albert Pujols, Eddie Murray, Jeff Bagwell, Fred McGriff, Carlos Delgado, Jason Giambi and Rafael Palmeiro.

I suppose the send-off for Konerko nationally kind of paralleled his career – quietly riding off into the sunset just as he quietly went about his business.

But “Paulie” has a statue at U.S. Cellular Field now as a constant reminder of his greatness. While many around the country are a little late to the party recognizing Konerko’s accomplishments, no White Sox fan needs to be reminded of what “Paulie” did for the game and the organization.

2 thoughts on “The Most Under-Appreciated Player in My Lifetime: Paul Konerko”