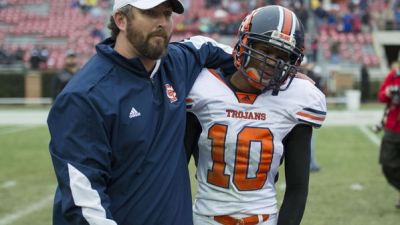 Demario Harris Jr. died as a result of playing football last weekend in Alabama. It doesn’t happen often, but don’t tell that to Demario’s parents.

There were over 1.1 million high school students playing high school football in 2011.  That number has remained close to static over the last three years.  When we read that three kids died as a result of on-field activity this past week, we grieve for the families, but start to do the math and find that even if three young men pass away each week the odds of a specific kid dying this season are roughly 30,000-to-one.

Given the option, parents would encase their children in bubble wrap before school each day.  From the time a child is born, parents are subjected to a faint sense of dread that the worst could happen.  It’s the most unpleasant phenomenon of parenthood, and watching them play football causes a heightened strain.

With every hit, parents say a silent prayer that their child will get up and trot back to the huddle.  Knee and ankle injuries happen all the time, and those are gifts for the kids.  Learning the difference between pain and injury is a valuable tool, and overcoming the adversity caused by injury is a gift that keeps on giving throughout life.

Adults who played high school football call on those experiences through their lives, as in, “If I could come back from a torn ACL to play at a high level, I can figure my way around or through this challenge.”

Head injuries are a significantly different situation.  When a person’s hard drive is compromised, recovery is not a matter of will.  The lasting effects cannot be overcome through strict adherence to a painful and trying rehab schedule as is the case with sprains, torn ligaments, and pulled muscles.

When children die, it gets a parent’s attention because it strikes at our most critical fear.  Watching the video of a football player take a blow to the head, wobble, and collapse changes immediately and permanently our perspective of an activity – even one with the unique benefits enjoyed by those who play high school football.

Approximately 300 times as many teens die from suicide than football related injuries, according to the Center for Disease Control, so that should inform parents as to where there most pressing concern should lie.  But don’t tell that to the parents of linebacker Isaiah Langston of Rolesville High School in North Carolina, Cornerback Demario Harris Jr. of Charles Henderson High School in Troy, Alabama, and Tom Cutinella, a player for Shoreham-Wading River High School on Long Island, NY.

Life is a risky business.  None of us lives forever, and the final adversity that renders us inert lays in wait for all.  Inviting it is common.  Cliff diving, racing cars and motorcycles, and speedboats are all death-defying exploits.  Maybe it’s a feeling of youthful invincibility – maybe it’s how we deal with our fear of impending doom.

Every time we put our kids in a car and drive to the grocery store, statistically we put them at greater risk for death than they experience on a football field.  But again, don’t tell that to those whose greatest fears have been realized as their kids played a sport that can teach so much, but extract a great cost too.

More and more, parents feel that providing an environment where the odds of peril for children are minimized is the job, rather than exposing them to character building moments where mostly manageable risk is inherent.  One tack sends children into an adulthood where survival equals winning.  The other builds men and women who embrace an energetic life of meaningful experiences.

Click here for healthy and beautiful teeth from the best dentist in Indiana – Dr. Mike O’Neil of Today’s Dentistry

The second group understands that adversity is part of the cost of living a full and enjoyable existence, and that getting up after being knocked down is the thrill of life.

Whether a son or daughter (more than 6,000 high school girls play organized football in America) plays high school football is a personal decision for a parent, but a reasonable CNA weighs heavily in favor of a reasonably athletic kid playing a game that will likely lead to so many positive experiences and takeaways.

One thought on “Three high school football players died this week – is playing the game worth the risk?”