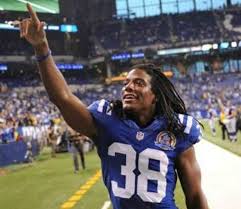 Sergio Brown’s performance yesterday had a lot of Colts fans asking, “LaRon who?”

There were so many things wrong with the Indianapolis Colts yesterday in the 20-13 win over the Baltimore Ravens that predicting a trip to the Super Bowl as a season finale for them seems ludicrous.

Four turnovers are difficult to overcome for any NFL team, but an Ahmad Bradshaw fumble with 1:49 left in the game immediately prior to what would have been a game-sealing Adam Vinatieri field goal is not the kind of play championship teams make.

Throw in the bizarre miscalculation that led to a fumble recovered by the Ravens by Griff Whalen as he refused to fair catch a punt despite a defender being in his hip pocket as he received a punt, and you wonder exactly how the Colts managed a win.

A master class in playing defense that was given by the Colts was the reason for the win.  Minus a terrible finish to the first half that allowed a field goal, the Colts defense was stout.

The Ravens converted one third down (1-11) and one fourth down (1-3).  After ringing up 454 yards and 38 points against a supposedly elite Carolina Panthers defense, the Ravens managed only 287 total yards and 13 points yesterday.  And while the Colts handed the ball to the Ravens four times, the Colts defense snatched it back three times.

Offensively, the Colts were relatively good, minus the turnovers.  The Ravens had not allowed any of its four previous opponents to total 100 or more rushing yards, but the supposedly anemic Colts running game created enough holes to net 117, while also posting the top total for passing yards for a Ravens opponent with 305.

The Colts weren’t great, but they were good enough to avoid beating themselves against a team that carried some swagger into Lucas Oil Stadium.  Beginning the season 3-1 after playing each of its AFC North rivals plus Carolina gave the Ravens hope that they had a chance to be elite again for first time since the retirement of Ray Lewis.

Who would have thought a lesson at the hands of Bjoern Werner, Sergio Brown, and Jhonathan Harrison would bring them back down to earth?

The Colts are starting to hit a dangerous stride after three straight wins.  When the defense looked good against Charlie “Clipboard Jesus” Whitehurst and the Tennessee Titans, that was expected.  While Joe Flacco and the Ravens aren’t exactly Peyton Manning’s Denver Broncos, they are still capable of very solid play.  The Colts slamming the door again and again showed something that might allow them to contend for playoff advancement beyond what seemed reasonable when the season started.

Once the mistakes are eliminated or minimized – and despite Andrew Luck’s two interceptions being the results of tipped balls, they were mistakes – this team could find a way to be the rare mixture of really good defense and really good offense that wins a championship.  Given the salary cap, building both an elite offense and defense simultaneously is impossible.

There are few Colts players that cannot be easily replaced – as is the case with Sergio Brown filling in for the suspended LaRon Landry – and the total continues to outweigh the sum of the parts.

Click here to call the best dentist in Indiana your dentist

A well-coached team filled with a bunch of guys who believe they are part of a special group can be dangerous, and just how dangerous will be determined during the next five games (@ Houston, vs. Cincinnati, @Pittsburgh, @ NY Giants, and vs. New England).  If the Colts can go 3-2 in those games, the final six (vs. Jacksonville, vs. Washington, @Cleveland, vs. Houston, @Dallas, and @Tennessee) line up nicely for a 12-4 record and a chance to finish as the top seed in the AFC.

Those who want to bet against the Colts at Lucas Oil Stadium for a playoff run to the Super Bowl, go ahead and line up.  There will be plenty of takers for your wager.

As long as the most important Colts (Andrew Luck, Ahmad Bradshaw, Reggie Wayne, Vontae Davis, and Pat McAfee) stay healthy, yesterday’s defensive performance might be a harbinger of enough goodness to get the Colts to the promised land.