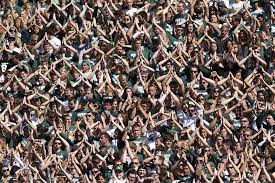 Too dumb to come in out of the rain?  Not Michigan State students.

Too dumb to come in out of the rain?  Not Michigan State students.

If Michigan State University athletic director Mark Hollis ran a restaurant, he would likely be a candidate for a visit from chef Gordon Ramsay on “Kitchen Nightmares.”

On the show, the primary message that Ramsay dispenses to owners of nearly bankrupt eateries is that customers are always right.  If they are given a great reason to show up and return, the business will flourish.  If not, well, Ramsay is a last best hope.

Hollis was chapped last weekend when the student section never filled, and became less full throughout the Spartans’ game against Nebraska.  His tweets represent a point of view best shared privately.

“I spoke with many students & they share my disappointment and embarrassment of the support coming from the southeast corner on Saturday.”

“We will work together to build a student section that enhances our teams ability to win championships. From kickoff to the end of the game.”

“As a program, we are prepared to make the changes that will fill Spartan Stadium with Spartan fans that want to be there.”

Coach Mark Dantonio was even more pointed in his criticism of the fans, “I appreciate the fans that did stay, and the fans that left, that’s just not right.”

Evidently, neither Hollis nor Dantonio have ever heard the saying, “He’s too dumb to come in out of the rain.”

The weather during the nearly four hour Saturday night game was atrocious.  Temperatures hovered around 40 with wind and swirling rain.  The score of the game was 27-3 with 13 minutes to play.

If Sparty allows Nebraska to score 19 points late to make the game competitive, that’s hardly the fault of the fans soaked to the bone who made the prudent choice that three hours of standing in miserable weather was quite enough.

Hollis’s rant is a great example of the hubris among athletic department administrators who believe that a ticket represents a responsibility rather than a consumer choice.  Just because you spend your professional life compelling students with total authority to act in a specific way doesn’t make them marionettes.

They are customers, patrons, human beings exercising free will.  Compelling students to stand in the cold rain for a far too long period of time is far beyond the authority of an AD or coach.  Students don’t HAVE to go to class; how can Hollis command them to remain committed to their seats for the duration of the game?

He’s an athletic director, not a czar.

Disappointment in fans’ behavior should be addressed in the same way as that of disgruntled customers – give them a reason to stick around.

What Hollis and Dantonio should have said is “Thank God our students are smart enough to get out of the rain.  We don’t need 13,000 kids running around campus with colds.  I applaud their discretion in choosing to get warm.”

I don’t know where Hollis sits during games, but I’m reasonably sure that he is in a nice warm suite with food and beverages.  Let him sit in the student section for four hours under adverse conditions, and see how long he sticks around.

If Hollis wants to keep fans around, instead of threatening to redistribute tickets to more committed fans, he should work with the rest of the Big Ten ADs to renegotiate TV contracts to mandate shorter timeouts and halftimes.  These games are built for broadcast, not live consumption, and until the endless and long stoppages of play are addressed, fewer and fewer in-stadium guests will be satisfied with the product.

Hollis’s petulance is a nightmare of customer service comportment.  He can’t control the weather, but he can control his response to it.  Instead of whining via Twitter, he should begin the work to fix the in-stadium product.

College football programs can’t have it both ways – TV money cedes power to the networks, and the networks will always want more inventory (time) to sell.  Those timeouts cause dissatisfaction among those in the stands.  When a great TV game is available in a nearby bar that is warm, offers multiple games simultaneously, and food and beer at reasonable prices, why in the hell would a reasonable person continue to stand in the rain to watch the end of a 27-3 game?

Hollis can either fix his own product or call Gordon Ramsay, I don’t care which, but he should definitely stop bitching about customers who pay to enjoy a night of football.  And next time, listen to Herm Edwards when he says, “Don’t press send!”