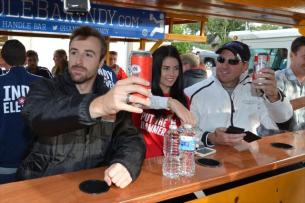 “The Mayor of Hinchtown,” James Hinchliffe, was in his element Tuesday. Photo courtesy of Verizon IndyCar Series

That fresh cracking sound heard when a can of beer is opened also resembled the sound of a new career opportunity opening up for James Hinchcliffe Tuesday.

The guy has his own beer. Why not promote it? Verizon IndyCar Series driver James Hinchcliffe and his new team Schmidt Peterson Motorsports utilized the cozy and festive confines of Flat 12 Bierwerks Tuesday afteroon to celebrate and announce their new partnership.

Flat 12 is the home of the Hinchtown Hammer Down Golden Ale. So “The Mayor of Hinchtown” invited media and fans alike to join his party at the near East Side brewery. Not surprisingly, the turnout was strong.

I’ve certainly been to larger, more formal press productions. I’m not sure I’ve been to a more fitting one. Local media, motorsports media, friends – they were all there to celebrate the announcement. It wasn’t a press conference or media event only. It was a celebration for a man proud of his career move and proud of his brew.

After three seasons with the larger Andretti Autosport team, the affable Canadian seems well-suited to adapt to a new challenge and new surroundings. The personality of the smaller, yet very competitive SPM team seems to be a good fit. Both have won races, and there’s still plenty of room for growth.

While Simon Pagenaud moved on to mighty Team Penske, Hinchcliffe is moving on to SPM for 2015. 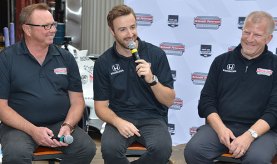 “To enter this environment with a lot of different responsibilities is exciting. One of the most attractive things about this thing is what they have accomplished in the last few seasons has been incredible. Winning races, being competitive at all tracks and finishing in the top five in the championship against more experienced teams at this level is impressive,” Hinchcliffe said. “Because they are young, there is still room for them to grow and improve, and that’s an exciting thought for me. I think we can only get better, and hopefully I can add to that program.

“Everyone wants to know if they can perform and I’m putting myself on trial a little bit.”

Time will tell if it’s the right fit long-term. But Tuesday, it sure felt like it.