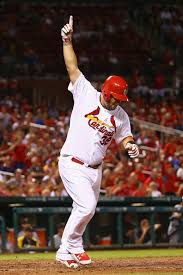 Matt Adams did what a series of Cardinals have done before – hit the ball hard with the game on the line.

This is their fourth consecutive trip to the NLCS despite an almost complete roster turnover since the first of those appearances.  And that is a unique accomplishment.

Most teams throughout baseball history that have routinely won have featured a core of elite players that set the culture and lead the team to excellence.  The St. Louis Cardinals look nothing like the team that won the 2011 World Championship.

It’s much easier to list the members of the 2011 team who remain than those who have gone.  Yadier Molina, Matt Holliday, Jon Jay, Daniel Descalso, and Lance Lynn are the only players left from the 2011 roster who played a significant role throughout this four-year run.  Matt Carpenter, Shane Robinson, and Pete Kosma notched a combined 39 at bats in 2011, so they don’t make the list.

Don’t even try to name the four pitchers who have led the Cardinals in saves over these four very unique seasons.  In reverse order – from 2014 back to 2011, they are Trevor Rosenthal, Edward Mujica, Jason Motte, and Fernando Salas.  Fernando Salas?

Lance Berman, David Freese, Colby Rasmus, Ryan Theriot, Skip Schumaker, and certain first ballot Hall of Famer Albert Pujols were starters in 2011 that have either been traded or left via free agency, and yet the Cardinals have kept rolling like an unstoppable force ordained as a success from on high.  Allen Craig and Rafael Furcal are gone too.

Let’s not forget about the retirement of manager Tony LaRussa and the best pitching coach in the history of the game Dave Duncan.  They left after 2011, replaced by Mike Matheny and Derek Lilliquist.  People thought that change might spell doom for the Cardinals.  Not so much.

And what about the front office?  General manager John Mozeliak has remained a constant, but farm director John Vuch and farm director Jeff Luhnow are gone from 2011.

Over these magical four years, the Cardinals have won seven playoff series while losing only two.  Not to rub in in the faces of Cubs fans (I’m one of those downtrodden mopes myself), but that is six more than the Cubs have notched in the last 106 years.

Since 2000, the Cardinals have qualified for the postseason 11 times, and made it to the NLCS an incredible nine times.

While other teams (hello Cubs and Theo Epstein!) sell the notion that failure must precede success and losing first is the only way to win, the Cardinals continue to roll over their roster and flourish.

There is no divine providence hanging over Busch Stadium.  The wins come to the Cardinals because they continue to do things the right way.  That starts at the top with the DeWitt Family ownership but continues through every level of the front office, minor league coaches and roving instructors, and scouting staff who continue to find players who can adapt to the Cardinal Way.

Click here if you need dental work done right and affordably by the best dentist in Indiana – Dr. Mike O’Neil

Continued success and excellence is annoying to fans of teams other than the Cardinals and Giants, but it should be admired and emulated.

As Cubs fans forever hope that next year will finally bring the answer to their dreams, the challenge for owner Tom Ricketts, team president Theo Epstein, and general manager Jed Hoyer isn’t to build a roster to win games, but to develop a culture of relentless excellence that rivals the Cardinals.  Good luck with that – and I mean it.

For the fifth straight year, it will be either the Cardinals or Giants as the NL team in the World Series.  That’s not the result of luck, but of an keenly crafted organizational philosophy that drives the desired result.

That’s a hell of a lot tougher to build than a talented farm system.

One thought on “St. Louis Cardinals – Four straight years to the NLCS while flipping roster”