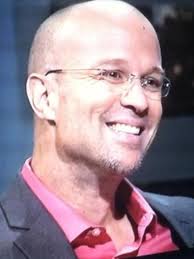 If you live in central Indiana and aren’t familiar with Gregg Doyel, you will be soon.

Yesterday was a day with two of the latter as the Indianapolis Star announced that Gregg Doyel will fill the big shoes left behind by Bob Kravitz’s departure for WTHR.com, and the Pacers announcing that Frank Vogel agreed to an extension to coach beyond this season.

Doyel is a passionate writer who feels stories.  When you read his work, you not only get his perspective but the emotions they elicit in him.  He can be bring fury as he rails against injustice, eloquently express mourning as he deals with loss, and applaud subjects who show admirable selflessness.

He is a real writer unafraid to expose his raw emotions.  Honesty will never be a problem with Doyel.  Making friends is not the name of the game for Doyel, as it is with many others in his business.  Whenever you read what he writes, you can be sure Doyel believes it – and passionately feels it.

Indianapolis is a city filled with real people who want the unvarnished truth, and that is exactly what they should expect from Doyel.

How does he compare with Kravitz?  While both are exceptionally smart and talented writers, I think the primary point of differentiation is that Bob writes with his brain and Doyel with his heart.  Bob is very deliberate and circumspect.  Doyel is more prone to express his emotions.

They are both great at their jobs, but attack from different flanks.

As for Frank Vogel, this is the last year of his current contract, and either the Indiana Pacers were going to part with a coach whose career record is 167-100 as he comes off consecutive trips to the Eastern Conference Finals, or let him go and hope they could attract a better leader.

Not much of a choice.  The Pacers could have asked some costumed rube in Area 55 to make that call, and he or she would have come to the same conclusion.  Frank Vogel is a trusted leader for this group of Pacers, and sending him away would have been abject madness.

The great thing about evaluating a talent like leadership is that there is usually a practical measure that allows for different styles to be seen as successful.  If someone asks the question – as Larry Bird obviously did – “Is Frank Vogel an effective coach?”, the correct answer is “167-100 and two trips to the ECFs!”

Sure, he rarely yells, and is relentlessly supportive of his players.  That doesn’t equate to weakness.  Because of the Pacers success, his behavior has come to define effective leadership.

Vogel acts less like a coach than anyone I’ve ever met.  He is a “normal” guy, for lack of a better word.  There is nothing intimidating about him.

In college at Indiana University, I believed that Bob Knight embodied all that is necessary to be a great coach.  His presence was so intimidating that students avoided him on campus.  His erratic bearing was seen as a tactic rather than psychological disorder, and I’m still not convinced it wasn’t.  He bizarre actions equated to leadership because of 11 Big Ten Championships and three National Championship banners.

If he had lost, Knight would have been vilified as a psychotic, and if the Pacers had been 100-167 instead of 167-100 over the last three-plus years, Vogel would be viewed as weak and easily exploited by players.

Click here for to get your teeth fixed by the best!  Dr. Mike O’Neil of Today’s Dentistry in Fishers

The Pacers made the right call by extending Vogel, and the Star decided to bring a game-changer into town as their columnist.  Yesterday was a good day for justice in hiring.