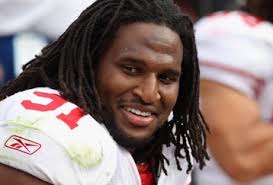 Ray McDonald is fortunate that fans were tired of thinking about domestic violence by the time he put hands on his not-so-lucky fiancee.

I guess it’s better for people who have never given a second thought to the plague of domestic violence to give that second thought than not to have thought about it at all, but anyone who thinks that violence against women stopped because clicks on the Ray Rice videos have slowed aren’t thinking clearly.

San Francisco 49ers defensive end Ray McDonald continues to play despite police reporting visible bruising on the neck and arms of McDonald’s pregnant fiancee on the night of her 911 call, but that story has faded from the A-block of Sportscenter so it must not be very important anymore.

Without the media to tell us what to be outraged about, we just aren’t very good at holding onto our angst over player-related crimes.  Nothing new has happened with the decision to either charge or not charge McDonald, so it has faded from our minds just as the NFL and 49ers hoped it would.

Our short attention span is the greatest tool for dealing with pain, as well as the biggest curse in eradicating the cause of much of that pain.  No one is more eager to move beyond an incident of domestic violence than the victim, and instead of demanding that the NFL and 49ers deal with McDonald in the way it was demanded when they were horrified by the Rice videos – we have moved on too.

Fan and media both want to watch and enjoy the games, and so after doing a certain amount of diligence that confirms a reasonable level of empathy for victims, the time came to move forward.  McDonald continues to benefit from that timing.

Human beings don’t like to look at constant images of their worst selves, and if police reports from the scene are to be believed, McDonald’s behavior certainly qualifies.

So the NFL happily rolls on with gigantic popularity and full houses, while women cower in terror.

Rice will appeal his indefinite suspension in early November, so the videos will get a whole new life.  Maybe a couple of people will begin to wonder again as I did this morning why McDonald continues to play for the 49ers, and why he hasn’t been charged yet.  The close ties between the San Jose Police Department and the 49ers might explain that, or maybe McDonald’s fiancee realized that living in fear as the soon-to-be wife of an NFL player earning millions trumps the life that Rice’s wife currently struggles through.

As consumers of a product, we can determine the tenor of discipline for the providers of that product with our wallets and eyes.  If we want to continue to support a team that puts its on-field product ahead of the welfare of women, that’s our choice.  Through their ridiculously soft position on domestic violence, the NFL has communicated its indifference toward women.

If not for the public’s response toward the second video showing Rice dropping his then fiancee with a left cross, he would have received half the length of suspension for a guy taking a hit off a joint.

Click here to get the best dentist in Indy to fix your champers – Dr. Mike O’Neil of Today’s Dentistry

Because we stopped hollering about domestic violence, McDonald continues to play.  We have moved on, and so the ultra-pragmatic NFL has moved on too.

No woman deserves to be the victim of domestic violence, but fans tacitly approve that behavior by allowing McDonald to play without protest.

The problem isn’t that the NFL allows perpetrators of domestic violence to continue to play; it’s that our short attention span allows the NFL to get away with it.

There is plenty of shame here to go around – most of it belongs to us.